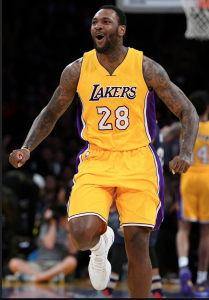 EL SEGUNDO — As he spent his childhood admiring Magic Johnson for delivering five NBA championships to the Showtime Lakers, it became “very special” for Lakers forward Tarik Black to have a face-to-face meeting with the team’s president of basketball operations. But instead of becoming either star struck or intimidated sitting in his idol’s presence, Black used his exit meeting last week to have “real conversations” both with Johnson, general manager Rob Pelinka and Lakers coach Luke Walton.

So, the inquisitive Black asked Johnson and Pelinka a series of detailed questions regarding himself. The most pointed one: “Where do you see me in five years as a player?” Because of how Johnson and Pelinka answered his questions, including that one, Black walked away the meeting expressing confidence he will remain on the Lakers for the 2017-18 season.

“I don’t know what kind of story will be created if I sat here and said no,” Black said. “That’s a given and the honest truth. I believe I will be. But once again the NBA is passion, basketball, business. You can’t avoid that.”

Black also cannot avoid the reality that he has a non-guaranteed contract with the Lakers for next season worth $6.65 million. With the Lakers (26-56) finishing the 2016-17 season with the NBA’s third-worst record, Pelinka and Johnson have both suggested they will seek to retain the majority of their young roster while becoming aggressive during trade and free agency talks. The Lakers also will have clarity on their summer rebuilding project on May 16 during the NBA draft lottery. Then, the Lakers will find out if they can keep their top-three protected pick otherwise owed to Philadelphia as part of that Steve Nash deal.

External circumstances aside, though, Black sounded encouraged Johnson and Pelinka told him, “I have a lot of potential and can get better.” All of which led Black to believe he will still wear a Lakers jersey next season.

“If they weren’t interested in bringing me back, they would’ve just said, ‘Well, it’s nice having you Tarik, we enjoyed you, we’ll be in touch,'” Black said, smiling. “The fact they’re sitting there, having the conversation and listening to my questions and they seriously answered them and we talked about development, it just gives me confidence moving forward.”

In fact, Black described his confidence as “through the roof” after averaging 5.7 points on 51.2 percent shooting and 5.1 rebounds in 16.3 minutes per game through 67 appearances.

Though those numbers are modest, they mark a noticeable improvement from the 3.4 points he averaged last season on a 54.8 percent clip and 4.0 rebounds in 12.7 minutes through 39 appearances under former coach Byron Scott. Black has grown drastically in his free-throw shooting from 2015-16 (42.2) to 2016-17 (75.2), something he attributed to “just working on it, developing it and becoming more confident.”

Though Black suggested his confidence waned last year partly because of a different mentality during a contract year, it did not help Scott limited his role. Scott attributed Black’s lack of playing time to inconsistent energy, something those inside and outside the Lakers questioned. The dynamic played out differently with Walton, who was an assistant coach for the University of Memphis during the NBA lockout in 2011 when Black was a sophomore with the Tigers.

“I asked him to give me a fair opportunity to grow and get better. That’s all I asked for,” Black said. “I didn’t say, ‘You coached me before, I’m expecting playing time and expecting this.’ I didn’t expect anything from him.”

Instead Black told Walton, “If you grant me this, I’m back with you. Grant me an opportunity to get better. Give me a fair opportunity to prove myself in the NBA.” Walton agreed, and Black resigned with the Lakers to a two-year, $13 million deal. Nearly a year later, Black saw Walton keep his word.

“At the end of this season, I can sit here and say he gave me a fair opportunity,” Black said. “So that established so much confidence in me, not only my belief in this organization and my belief in him as a coach, but my belief in myself. The opportunity allowed me to go out there on the floor and prove like my rookie year that I am an NBA-caliber talent and also I can get better.”

How will Black get better? He said Johnson and Pelinka implored him to reduce the body fat in his 6-foot-9, 250-pound frame. They also told Black to sharpen his conditioning, something they basically stressed to all of the players. Black added the Lakers want him to develop his offensive game, considering his production centers more on hustle plays than an established presence in the post or near the perimeter.

Nonetheless, Black believed he has progressed steadily from the circuitous journey he traveled. Black went undrafted out of the University of Kansas. He played 25 games in the 2015-16 season with the Houston Rockets before they waived him to make room for free agent Josh Smith. The Lakers signed Black, whose promising first year (7.2 points on 58.9 percent shooting, 6.3 rebounds in 38 games) became sullied his second year amid reduced opportunities. Black then found more playing time despite competing against a crowded frontcourt featuring Julius Randle, Larry Nance Jr. and Thomas Robinson. Black also played at center.

So during the 2016-17 season, Black remarked to former Lakers teammate Lou Williams, “In the NBA there hasn’t been anything I haven’t been through already.”

The Lakers apparently have noticed, with Johnson and Pelinka offering positive feedback.

“Just my performance, coming out every night ready to play,” Black said. “Changing games around when I had the opportunity to, always staying prepared with who I am as a teammate and a person. They really complimented me on that and my presence in the locker room and my influence in the locker room.”

Even if Black is 25 years old entering his fourth season, he has become somewhat of a veteran voice with his younger teammates. After the Lakers lost to Brooklyn in mid-December to extend an eight-game losing streak, Black and Robinson addressed the team at center court the next day at practice in Philadelphia.

Black also definitely believes what Pelinka and Johnson said about his development mattered for obvious reasons. Though neither discussed what the Lakers’ rebuilding future will entail, Black walked away confident that he will be a part of that project.