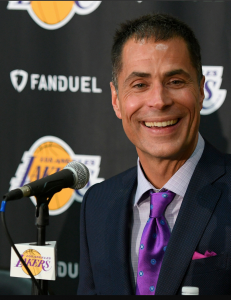 “He’s a very very promising player and had incredibly strong minutes for us, especially in the second half of the year. Really, he is someone we consider to be one of the pillars for the future,” Pelinkla said. “But I think when you’re talking about a 19 or 20-year-old in the league, there’s always that kind of balancing act of not overexposing a player and doing too much that you have negative returns on it. With young players, that’s what we’ll have always have to be mindful of.”

After all, Zubac had averaged solid numbers of 10.6 points on 59.1 percent shooting and 5.3 rebounds in 20.9 minutes through 12 games he started this season. Lakers coach Luke Walton also remained undecided if Zubac would start to open the season. Though it might be a stretch to call Timofey Mozgov “another great center” as Pelinka put it, Mozgov mostly sat at the end of the season so Zubac could develop once the Lakers were eliminated from the playoffs.

Pelinka also praised Ingram for “his mentality,” Clarkson for playing in “attack mode” and Russell for closing out the season with more consistency. Pelinka also contended Russell and Clarkson can co-exist in the backcourt, arguing “the hybrid style of basketball is the way the game is going and that’s the way Luke coaches.”

But Pelinka outlined in more detail the importance of the team’s center position as the NBA evolved from a style that differs during the era when George Mikan, Wilt Chamberlain, Kareem Abdul-Jabbar and Shaquille O’Neal dominated for the Lakers inside.

“Of course, a lot of them are becoming skilled in spreading the floor, taking threes and showing more versatility,” Pelinka said. “We know that getting a quality big, a quality five and a center, although it may be different we had in the past in Wilt, Kareem or Shaq, a player that fits into today’s game [is important]. A player that can be a dominant big man, a dominant five is definitely something we have as a priority.”