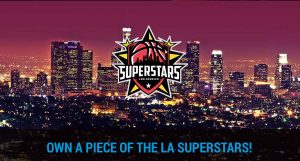 In a city consumed with the Lakers’ championship parades and star players, Los Angeles has just launched a team that will give fans a say in constructing a title-contending roster.

No, the Lakers are not hiring fans to work with their front office brass in governor Jeanie Buss, president of basketball operations Magic Johnson and general manager Rob Pelinka. Champions League Basketball, a new professional summer basketball league featuring former NBA players, launched the Los Angeles Superstars, a team that will allow fans to have an ownership role by investing in the team.

Team ownership will include various perks, including attendance to practice, sitting in the owners section, attending team parties, receiving discounts on tickets, merchandise and parking, attending player meet-and-greets, participating in management conference calls and having the chance to be an assistant coach for a game. The league, which will feature more than 160 players, will have regular-season play in July and August followed by a tournament in Las Vegas in September. The Champions Basketball League posted information on fan investment opportunities on their website.

“After decades of involvement with the sport, it was obvious that fans wanted more opportunities to connect with the game,” said L.A. SuperStars CEO and Western Region EVP Mark Scoggins said in a statement. “So, we created the opportunity where fans could be owners, with the amazing perks ownership implies. This is actual ownership where fans become owners along with our founding team owners, so it is a once-in-a-lifetime opportunity for fans to be more connected than ever before to a professional sports team. Fans for the first time in L.A. history can enjoy all the special perks that only ownership can bring.”