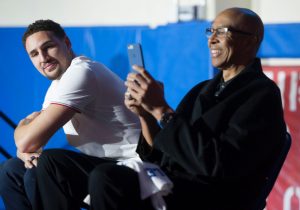 Klay Thompson looks at his father Mychal Thompson as he records a video during a ceremony retiring his jersey number at Santa Margarita Catholic High School in Rancho Santa Margarita, Calif. on Friday, January 13, 2017. Thompson helped the Eagles to a Division III State championship in 2008, was a first round draft pick of the Golden State Warriors in 2011 and helped them win a title in 2015. (Photo by Kevin Sullivan, Orange County Register/SCNG)

The anxiousness has hardly subsided, even as Mychal Thompson is potentially one game away from seeing his son, Klay, win his second NBA championship in the past three seasons with the Golden State Warriors.

With the Warriors nursing a 3-0 series lead over the Cleveland Cavaliers in the NBA Finals, Thompson has found little comfort with no NBA team in history ever overcoming such a deficit. As the Warriors enter a potential series-clinching Game 4 in Cleveland on Friday, Thompson still remains haunted with Golden State coughing up a 3-1 Finals series lead to the Cavaliers last year.

So, another Warriors victory no doubt would put Thompson at ease. It would also leave him convinced that Golden State would go down as the NBA’s best team because of a 16-0 record in the playoffs.

“That’s hard to get. It’s not guaranteed they will get to 16,” Thompson said. “But if they are able to pull that off…”

Thompson trailed off for a few moments, reflecting on all the NBA basketball he witnessed as a child, as as 13-year NBA player, as a member of the Showtime Lakers (1987-1991) and as a longtime radio color analyst for KSPN-710 AM.

“I’ve seen all the teams from Bill Russell’s teams to now,” Thompson said. “If they go 16-0, with the season they have and the personnel they have, to me, they would be the greatest team in history.”

In other words, Thompson will not represent one of many former NBA luminaries to boast superiority about their past teams over the current Warriors.

“I better say we’d win because Magic [Johnson] would have me exiled from L.A.,” Thompson said, laughing. “But this Warriors team is legit. They can beat anybody.”

Johnson made it sound like the Warriors would not even come close toward beating the Showtime Lakers. Johnson, who has since become the Lakers’ president of basketball operations, contended at an American Express sponsored event on Monday that “we would probably sweep them.”

“Magic can play against Jesus and his disciples; he’ll still think he’s going to win,” Thompson said, laughing. He’s the ultimate competitor. He’s not going to back down or concede to anybody. I don’t expect him to say anything else but our Showtime Lakers would beat this team or sweep this team.”

Thompson would not say such words, though. After winning two NBA championships with the Showtime Lakers (1987, 1988), he fully understood the distinguishable advantage his team had.

Even with the Showtime Lakers holding that advantage over the current Warriors, Thompson sounded more uneasy elsewhere.

He first openly imagined what would happen if he had to switch on defending Warriors guard Stephen Curry.

“I would get lightheaded,” Thompson said. “My feet would stop moving. I would scream ‘Help! Help! Help!’ as loud as I can. Meanwhile, Stephen Curry would make me look like the Statue of Liberty with my hand standing up in the air as he goes around me.”

It might be a fun comparison to stack up Hall-of-Famers in Johnson, Abdul-Jabbar and James Worthy against future ones, such as Kevin Durant and Stephen Curry. But Thompson went deeper, ticking off the various skillsets that Golden State has showcased better than his Showtime teams.

“Their shooting, ability to switch everything defensively and the great size and length on the perimeter are things that we didn’t have,” Thompson said. “Even though Magic was 6’9, he wasn’t a defender that Draymond or Kevin Durant are with their size and versatility on defense. Then it’s the way they shoot the ball. We shot eight 3’s a game. These guys make eight in a quarter. Their 3’s would beat our 2’s.”

But would their personnel beat the Showtime Lakers?

“I think we could win, don’t get me wrong,” Thompson said. “We could definitely win a seven-game series. But I think this team is better and more versatile than we were.”

All of which made Thompson believe something else about the Warriors’ superiority. He likes how Golden State would matchup with the 2001 Lakers, which went 15-1 in the NBA playoffs to win their second consecutive championship.

“That means I have to say something against Kobe [Bryant],” Thompson said. “I would give the Warriors the slight edge.”

“With Kobe and Shaq, that’s one of the greatest duos in history,” Thompson said. “Nobody had an answer for Shaq. You could still triple team him. He’s still going to score by taking it to the basket and dunking on you. But they would have to play very fast. In the Phil Jackson system, he liked to slow it down, play the triangle and take advantage of Shaq inside. You’d have to run and make Shaq come out on the perimeter on defense and force the game out that way.”

Because of the Warriors’ potential greatness, Thompson has told his son Klay that “this team is capable of winning five or six championships if they respect what they have.” That starts with ensuring a sweep against Cleveland, both to make NBA history and to avoid giving any chance toward last year’s nightmare becoming a possibility.

“This does not come around very often,” Thompson said. “When you have a chance to be on a special, iconic and legendary team, treat it with respect and work hard and stay focused and get the most out of it. That’s the opportunity most of this players have.”