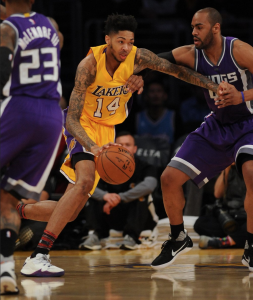 After the Lakers selected him with the No. 2 pick in the 2016 NBA Draft, he charted out a goal to win the league’s rookie of the year award. Instead, Ingram made the NBA’s All-Second team and received only 11 first-team votes.

Despite leading the NBA’s in minutes played per game (28.8), Ingram ranked seventh in his class in points (7.4), 21st in field-goal percentage (40.2) and seventh in rebounding (4.0). Milwaukee Bucks guard Malcolm Brogdon, who was picked 36th overall, ranked second in minutes played (26.4 per game) while leading rookies in assists per game (4.2) and steals (1.12) and finishing second in three-point field goal percentage (40.4) and free throw percentage (86.5).

Still, the Lakers had increasingly liked Ingram’s development enough to consider him untouchable in in trade discussions both leading up to the trade deadline and during the offseason. Despite his modest numbers, the Lakers have optimism with Ingram’s long-term trajectory with his positional versatility, shooting, defense, finishing, post-up game and ball handling. The Lakers have downplayed Ingram’s listed 6-foot-9, 190-pound frame, mindful of Ingram’s skillset and that his body will become stronger with age (20) as well as proper weight training and nutrition. The Lakers also have become encouraged with Ingram’s professionalism and work ethic, two traits that both resonated with teammates and Luke Walton’s coaching staff.