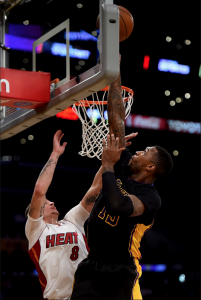 The Minnesota Timberwolves expressed interest in free-agent forward Thomas Robinson, according to a league source familiar with the situation.

But the Lakers liked the 26-year-old Robinson for his hustle that yielded 5.0 points on 53.6 percent shooting and 4.6 rebounds in 11.7 minutes through 48 games. Robinson also had a cap-friendly contract just under $1 million.

The Sacramento Kings drafted Robinson fifth overall in 2012 before having short stints in Sacramento (2012-13), Houston (2013), Portland (2013-14), Philadelphia (2014-15) and Brooklyn (2015-16). After granting Robinson an invitation to training camp last year, the Lakers kept him through rounds of roster cuts and throughout the rest of the season.