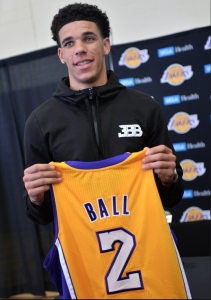 The Lakers signed Lonzo Ball, Kyle Kuzma and Josh Hart to their rookie contracts on Monday.

As per the terms of the NBA collective bargaining agreement, Ball is slated to have a four-year deal worth $33 million. The terms for Kuzma and Hart were not immediately available. Rookie center Thomas Bryant is expected to sign his contract soon.

On Monday, the Lakers will also held their first practice for their Vegas Summer League in a closed session at their practice facility in El Segundo. After the 4th of July holiday on Tuesday, the Lakers plan to practice the rest of the week before going to Las Vegas for games on Friday (Clippers), Saturday (Boston) and Monday (Sacramento).