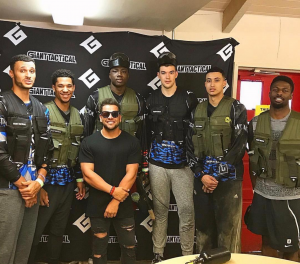 EL SEGUNDO — The shots fired quickly out of their paintball guns. So did the verbal lobs when the Lakers debated who was the best paintball player on a recent excursion last weekend at the Hollywood Sports Paintball and Airsoft Park.

“I don’t want to brag about it. But I was the best one,” Lakers second-year center Ivica Zubac said following summer-league practice on Wednesday at the Lakers’ practice facility. “It was fun, and I’m looking forward to playing again.”

It wouldn’t be surprising if Zubac’s teammates want to play again soon. After all, plenty of them disagreed with Zubac’s scouting report surrounding his paintball game.

I mean he was definitely the MVP of my squad.. we were on different teams though ‍♂️ https://t.co/ePOjanFJUQ

Nance hosted the outing with Zubac, second-year guard David Nwaba, rookie forward Kyle Kuzma, rookie guard Josh Hart and rookie center Thomas Bryant. Though that event served as an informal team-bonding activity, it shouldn’t be surprising Nance touted his supremacy over Zubac. Nance has done that ever since the Lakers selected Zubac with the 32nd pick of the 2016 NBA draft.

It wasn’t just Nance that questioned Zubac’s assertion, though.

“He’s lying; it wasn’t him,” Kuzma said when informed Zubac considered himself the best paintball player. “Josh Hart was pretty good. He’s solid. David Nwaba didn’t get hit once partly because he was hiding the whole time. That’s the whole objective.”

“Nah. That’s probably me,” Hart said. “Big Zu helped me out one time. I was trapped under a car. Someone was just laying it on me. I couldn’t move. So he kind of helped out there.”

Hart quickly clarified his rankings. He listed Nance as the best, while ranking himself in second place. Hart added, “Larry and I will have to challenge each other sometime soon.”

When informed of his teammates’ perspectives, Nance triggered another insult with a tweet.

So Zu was the only one that put himself in the top 2? That definitely says something.. I agree with JHart https://t.co/sApo0nINdx

It also definitely says something that new and familiar Lakers teammates bonded over an event that produced a lot of memories.

Kuzma touted himself as the most aggressive paintball player among the group, which also fits how he played through three seasons at the University of Utah. But that quality partly explains why Kuzma recalled feeling sore when summer league practice began on Monday.

“I got hit in the back of my neck,” Kuzma said. “It kind of hurt a little bit. First 20 seconds going in. I was ducking a lot after that. I’m good.”

Hart apparently plays paintball with the same poise and decision-making on the court after impressing NBA talent evaluators with his shooting, hustle and leadership through four years at the University of Villanova.

“I didn’t get hit too much. So I was happy about that,” Hart said. “I nailed a couple of guys.”

And Zubac? Well, the Lakers’ second-year center apparently hit too many people to count. Hence, his response on if he’s hit more targets than Nance.

Nance argued otherwise With Nance wondering aloud why no other teammates that were interviewed agreed with Zubab’s ranking, Zubac quickly fired back with a tweet.

I'm only one who's realistic over here https://t.co/DPpxzUhBgX

Perhaps various Lakers players will fire back with their paintball guns soon.