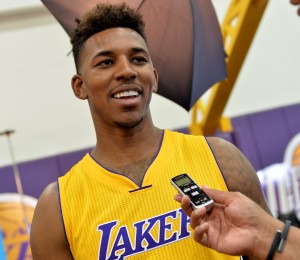 Even with a persona known for his high-volume shooting, eclectic clothing and taste for the spotlight, Nick Young has added a new wrinkle to the life of “Swaggy P.”

He has a good chance to land his first NBA ring. Young agreed to a one-year deal worth $5.2 million with the Golden State Warriors with their mid-level exception, according to agent Mark Bartelstein. Young also met with the Warriors on Saturday that also including going out with forward Draymond Green, an incident Green documented on his Snapchat account. Though he also sparked interest from the Oklahoma City Thunder and New Orleans Pelicans, Young prioritized championship ambitions over maximizing his salary and role.

“When the Warriors opportunity presented itself, the way they play and how the guys wanted him on the team, it was overwhelming for him,” Bartelstein said. “To have a chance to play for the Warriors, with the style they play, the way they share the ball, and how Steve Kerr and his players wanted him to be there, this is a great choice for him.”

Young opted out of his $5.7 million player option with the Lakers to become a free agent, hopeful that he could accomplish two things. With his four seasons with the Lakers coinciding with the organization’s worst stretch in its franchise history (91-237), Young became eager to join a playoff team. He also wanted to maximize his earnings, while retaining a significant role as a scorer.

Young took a relative paycut, but accomplished his other priorities by joining the Warriors, which have won NBA championships in two of the past three years.

Young provides secondary scoring to a league-leading offense that features Steph Curry, Kevin Durant and Klay Thompson. After feeling empowered under Lakers coach Luke Walton, Young could feel similar vibes with Golden State as Walton’s coaching partly stemmed from what he experienced as a Warriors assistant for two years. The Warriors will sign Young using most or all of their mid-level exception worth $5.2 million, marking a relative paycut Young would have made had he stayed with the Lakers. Yet, Young could enjoy a hefty pay raise next year as a free agent should he remain productive in the 2017-18 season.

Young admittedly had thought the Lakers would waive him last season after experiencing two frustrating years with former Lakers coach Byron Scott. Under Scott, Young averaged 13.4 points on 36.9 percent shooting in 2014-15 and career-lows in points (7.3) and shooting percentage (33.3). During that time, the two frequently clashed over Young’s playing time, inconsistent play, defense, playful personality and tardiness in arriving to the arena at least 90 minutes before tipoff. Meanwhile, Young took issue with Scott’s frequent public criticisms, his system and his role.

Things became more complicated late in the 2015-16 season after former teammate D’Angelo Russell inadvertently made a video public that exposed Young admitting to being unfaithful to his former fiancee, hip hop artist Iggy Azalea. The Lakers had considered parting ways with Young because of tension with Russell. But the Lakers kept both players after hiring coach Luke Walton.

Young immediately gravitated to Walton’s coaching, including his positive reinforcement, sense of humor and coaching philosophy that put more importance on outside shooting. As a result, Young averaged 13.2 points on 43 percent shooting while also impressing the Lakers with his defense in 60 starts. Still, Young sensed his opportunities could dwindle as the Lakers put a heavier emphasis on their young players. Young sat out the 16 of the final 17 games, while Walton granted extended minutes to his younger players for development purposes.

Young, who starred at Cleveland High of Reseda and USC, originally signed with the Lakers in 2013-14 and immediately felt at home. Though the Lakers had a 27-55 record with key injuries to Kobe Bryant and Steve Nash, Young became a fan favorite during that dreary season because of his play, hometown roots and entertaining personality. Though the Lakers had mixed feelings about the fast-paced offense under former coach Mike D’Antoni, Young excelled in that environment and averaged 17.9 points on 43.5 percent shooting in 64 games. After missing out on LeBron James and Carmelo Anthony in the 2014 offseason, the Lakers then resigned Young to a four-year, $21 million deal.

Three years later, the Lakers have maintained they would keep flexibility so they have maximum purchasing power in the 2018 offseason when James, Paul George and Russell Westbrook might become free agents. Though the Lakers had no interest in giving Young a multi-year deal and a substantial pay raise, Young still fielded offers elsewhere, including from the defending NBA champions.

Can the Thunder keep Paul George from bolting to the Lakers?