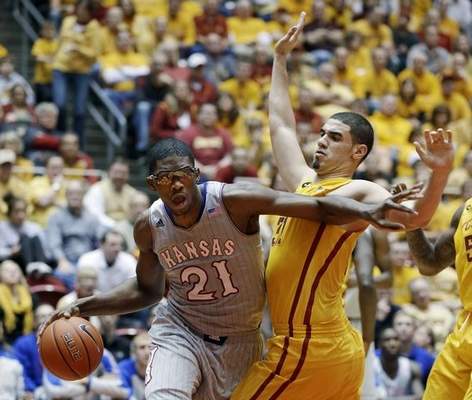 In this Jan. 13, 2014, file photo, Kansas center Joel Embiid (21) drives past Iowa State forward Georges Niang during an NCAA college basketball game in Ames, Iowa. Embiid didn’t pick up a basketball until a few years ago, when a friend informed him that very few 7-footers succeed in soccer. A couple months later, Embiid was lured to a basketball camp in the Cameroon capital of Yaounde run by Timberwolves forward Luc Richard Mbah a Moute, one of just two players from Cameroon to have played in the NBA. (Charlie Neibergall/The Associated Press File)

Below is a recent interview with NBA TV analyst Grant Hill, who provided one of many expert voices surrounding who the Lakers should pick with the seventh pick of the 2014 NBA Draft on Thursday.

When you look at who might be available in the seventh slot, who would best help the Lakers?

Hill: “Seven is a tough spot. Obviously you don’t know what’s going to happen with Joel Embiid and the situation there with him having surgery due to a stress fracture. Seven is tough because you don’t know for sure. You can model things out. But typically things never go according to plan. The Lakers, I think it depends on what ultimately their goal and objective is. Are they trying to retool quickly and make one last run at it when Kobe Bryant is there or are they preparing for the future? I think depending on what they’re trying to do depends on how they’re trying to approach it. I’m sure they’re still trying to game plan. They haven’t decided who’s going to coach their team. But in reality, they can get a good player. At seven, you can get a player who is a rotation player and a player that can have an impact and be a part of the future. Exactly who that is, I can’t tell you. I don’t know. They have a lot of needs.

What’s going to happen with Steve Nash? Is Nash going to play and is he going to be healthy? What are they going to re-sign Pau Gasol? There’s a lot of decisions that need to be made for this franchise. They can say, ‘We want to fill a need or just find the best available player we can get at seven.’ There’s a lot of factors that I think are involved with the Lakers.

One of the possibilities entails the Lakers trying to upgrade at point guard, getting someone such as Dante Exum and Marcus Smart if they’re available, so they could have Nash play a mentorship role off the bench partly because of his back. Playing with Steve, how do you think that idea would play out?

Hill: “If those two guys are there at seven, you have to entertain the possibility of drafting them and having a guy like Nash. He helped Goran Dragic [in Phoenix]. Having played with both of those guys in Goran’s first year, Steve was still playing and playing at a high level. He was able to learn from watching and listening. Steve may not be able to go out and play like he could play back in 2007 and 2008. But his intellect and understanding of the game and him being there as a mentor would be huge.

It’s maybe even more powerful when he’s playing. When he’s playing, he’s competing. Those guys are different players than Steve in terms of style. Marcus is more of a power point guard and has good size and strength and good toughness. Dante, from what I’ve seen, is more of a taller guard and more athletic. But they’re both very talented and very skilled. You can’t help but learn from having a Steve Nash around. That could be a good strategy for the Lakers.”
END_OF_DOCUMENT_TOKEN_TO_BE_REPLACED

Lakers coach Mike D’Antoni, prior to Sunday’s game against the visiting Orlando Magic, was told of a recent conversation that took place between Nick Young and Pau Gasol, who apparently want to do everything they can to avoid being the worst Lakers team since it moved to Los Angeles for the 1960-61 season.

“They probably should have had that conversation a little earlier, first off,” D’Antoni said, drawing a large round of laughter from assembled reporters. “But you know, hey, great, whatever we try to do is good.”

END_OF_DOCUMENT_TOKEN_TO_BE_REPLACED

Gasol said the tendinitis in his knee wasn’t as painful as it was and as if to show off his newfound health he ran a series of post-practice sprints before shooting a number of free throws. He said a decision about his participation will be made just before the tip.

“I’m happy with the practice and how I felt,” Gasol said. “We don’t want to make the decision quite yet. So, we’ll see how tomorrow in the morning how I feel. … It (a two-week layoff) helped, not just the rest but the work we did to strengthen the knees.

“I can move around much better.”

Nash ran without pain in his fractured left leg during what could only be described as a light practice, devoid of any contact. The Lakers went through a number of drills, but didn’t scrimmage as they prepared for Tuesday’s game against the Bobcats.

“We’ll see,” Nash said. “Hopefully, I can play by Christmas. We’ll see how it responds this week. Today we didn’t do anything 5-on-5 or with any contact, so it was just running and cutting. We’ll see how the rest of the week goes.”

Madison Square Garden isn’t really on Broadway, it’s a block over on 7th Avenue, but, hey, you get the idea. The Lakers played the Knicks on Thursday, on the figurative stage at the World’s Most Famous Arena, and got thumped. Then they got hammered in the court of public opinion. Here’s a sampling from TNT’s commentators.

Steve Kerr on the Lakers’ lack of confidence: “The Lakers have no offensive confidence, no rhythm. When you don’t play with a precision offense, you end up with poor spacing defensively. Maybe when the Lakers come back with (Pau) Gasol and (Steve) Nash and their offense improves, maybe their defense can improve as well.”