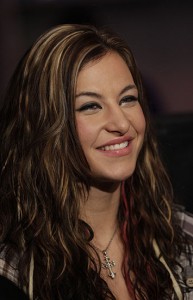 By 6:55 p.m., Tate was not happy to learn Rousey had said Tate had turned down a title shot.

Straight up Lie “@fighterspiritla: @mieshatate @rondarousey Ronda said in her interview with Ariel that you turned down a rematch with her.”

He’s misinformed “@ccasiglio: @mieshatate I just read Dana said u turned it down.”

The Twitter flurry continued Friday morning when someone pointed out to White that Tate claimed she never turned down a fight with Rousey:

Tate replied about an hour later:

@danawhite @menoone71 Cool, next time don’t specifically call me out along w Mcmann saying I didn’t want 2 take the fight

@osuricky @danawhite Never would turn down a chance to be in the UFC, I would fight Brock Lesnar if they said it would be in the UFC

During those tweets, however, White weighed in with perhaps the final word: