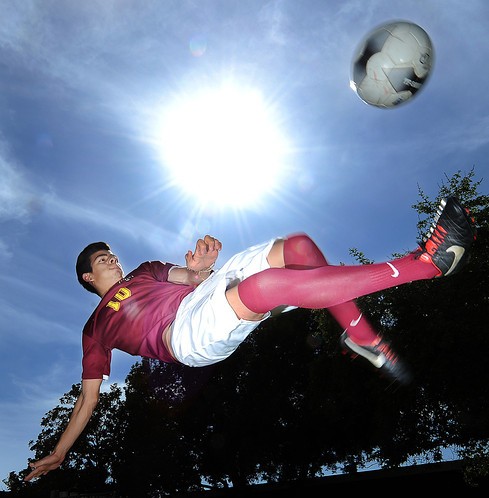 FIRST TEAM
Nico Andrade, Upland, Senior, Defender
The first team all-CIF selection was the leader of an Upland defense
that allowed just 23 goals in 27 games as the Highlanders finished
second in the Baseline League with a 16-8-3 overall record and
advanced to the second round of the CIF-SS Division 2 playoffs.

Gabe Brown, Diamond Bar, Senior, Defender
The leader of the defense for the Hacienda League co-champions was
part of an effort that held opponents to a total of 29 goals this
season. Brown helped Diamond Bar to a 15-7-2 overall record and the
second round of the CIF-SS Division 5 playoffs.

Guillermo Duran, Carter, Senior, Forward
The first team all-CIF selection and San Andreas League Offensive MVP
collected 19 goals and 16 assists for the a Carter team that won the
league title, went undefeated in the regular season, earned the No. 1
playoff seed in CIF-SS Division 6 and reached the championship game.

Billy Flores, Alta Loma, Senior, Forward
The co-MVP of the Baseline League and first team all-CIF selection led
Alta Loma with 17 goals and six assists as the Braves finished third
in the Baseline League but reached the quarterfinals of the CIF-SS
Division 2 playoffs during a run that included a first-round upset of
third-seeded Palm Springs.

Juan Gutierrez, Pomona, Senior, Midfielder
The first team all-Valle Vista League selection led Pomona to the
league championship with an 11-1 mark and helped the Red Devils reach
the second round of the CIF-SS Division 4 playoffs, which they
finished with a 14-5-4 overall record.

Brett Jenkins, Damien, Senior, Midfielder
The Sierra League MVP led the Spartans with 12 goals and 13 assists in
helping the team to an outright league championship, an appearance in
the second round of the CIF-SS Division 1 playoffs and a 15-4-3
overall record.

Omar Montes, Fontana, Senior, Defender
The Sunkist League MVP was the leader of a defense that allowed just
28 goals in 24 games as Fontana won the Sunkist League championship
without a loss in league play and advanced to the second round of the
CIF-SS Division 2 playoffs.

Angel Sanchez, Rialto, Senior, Goalkeeper
The first team all-San Andreas League goalkeeper made 97 saves in 18
games, good for a 1.1 goals against average for a Rialto team that
fininshed second in the San Andreas League and reached the
quarterfinals of the CIF-SS Division 6 playoffs.

Ben Santia, Claremont, Senior, Midfielder
The Division 1 first team all-CIF selection and first team all-Sierra
League selection had 10 goals and eight assists for the Wolfpack,
which finished second in the league and nearly advanced to the
semifinals of the CIF-SS playoffs, losing on penalty kicks in the
quarterfinals.

The fact that an unseeded Ontario team was even in the CIF final was a significant occurrence for the school. The Jaguars appeared to have the first CIF championship in the program’s history all but wrapped up, scoring the go-ahead goal with 5:11 remaining in the game. South Torrance, however, tied the game with 1:18 to play by heading in a long throw in.

A game after Ontario needed penalty kicks to prevail in the semifinals, the final was again proving to be difficult. Ontario bounced back to score the game-winner in sudden death overtime as Luis Montiel one-touched a pass from Jesus Soria into the back of the net with 1:33 remaining in the first extra period to set off a wild celebration.

The CIF championship was the second in the school’s history in any sport, joining the undefeated 1991 baseball team.