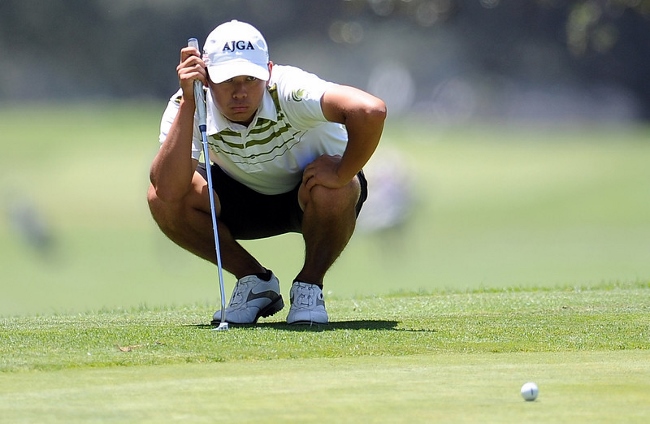 The senior helped the Spartans to the season-opening Riverside Poly tournament championship. He had Damien’s co-low score of the event. He had the Spartans’ low scores in other tournaments and helped Damien to an undefeated team season and the Sierra League title.

He was fourth in the Father Joe Barry Masters tournament at Ancil Hoffman Golf Course. The Spartans finished fourth in the two-day tournament. He was 16th in the three-day Champions Invitational at the Golf Club at Terra Lago. He was also low medalist in six league matches.

He seemed to play his absolute best golf when it counted the most. That would be the postseason.

The UC Riverside-bound golfer was the lone San Gabriel Valley golfer to advance to the CIF State tournament in Carmel. He finished tied for fifth with a 1-under-par 70 at Quail Lodge and Golf Club.

He was the first Damien golfer to advance to state in seven years.

About the only honor the senior did not reap was the Sierra League title, losing by four strokes to teammate Yu-Chuan Hsiang in the two-day tournament at General Old Golf Course.

He finished tied for 11th at the CIF-SS Southern Division tournament and then took fifth, losing in a three-way playoff for third at the CIF-SS finals at La Purisima in Lompoc. He earned a spot in the state finals with a 2-under-par 70 at Brookside Golf Course to tie for fifth.

The Spartans took second in the CIF-SS team Southern Division tournament, six strokes behind Sunny Hills, one of the best teams in the state.

The Spartans just missed advancing to the state qualifier, finishing seventh in the CIF-SS finals at Mission Lakes Country Club in Desert Hot Springs, three shots out of a qualifying position. He shot a 78 in that event.

COACH OF THE YEAR: Ty Watkins, Diamond Bar
Despite miserable weather conditions at Sierra La Verne, the Brahmas won the CIF-SS Western Division team championship by 15 strokes. Two of his players, Jefferson Kao, and Jason Chen, broke par. Dean Sakata, the Brahmas’ top player for most of the season, tied for sixth. The Brahmas finished seventh in the CIF-SS team finals at Mission Lakes, led by Sahith Theegala, who shot a 68. They missed the cut for state by four strokes.

FIRST TEAM
SAHITH THEEGALA, So., Diamond Bar
Theegala’s only off performance was in the team finals. He had the champion Brahmas’ fifth-best score. He was fifth at the divisionals, tied for 11th at the CIF finals and shot a 73 at the state qualifier. He was low medalist at the team finals with a 68.

RICO HOEY, Sr., Rancho Cucamonga
The USC-bound senior was the individual champion in the CIF-Southern Section, shooting a 3-under 69 at La Purisima Golf Course in Lompoc. He also placed third at the CIF-SS Central Division championships, shooting a 70 at Victoria Country Club in Riverside.

MICHAEL STARBUCK, Sr., Citrus Valley
The senior led the Blackhawks to their third straight Mountain Valley League title and won the MVL individual title. He shot a 77 at the CIF-SS Individual finals, finishing 24th and advancing to the regional finals.