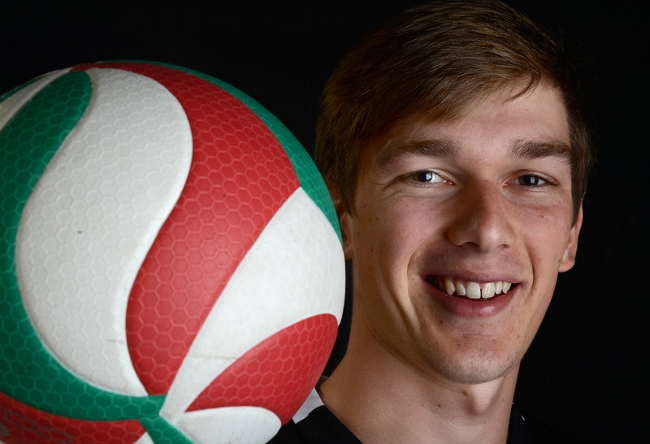 PLAYER OF THE YEAR: Stephen Zetterberg, Claremont
Story By Staff Writer Michelle Gardner
Volleyball isn’t the traditional sport for boys to focus on growing up in the Inland Empire. For most that would be basketball, soccer or baseball.

Stephen Zetterberg grew up competing in those too but older brother Andrew played volleyball, so that’s the sport he gravitated toward.

Zetterberg, 17, registered 234 kills in 68 sets in leading the Wolfpack (25-6, 11-1 in Pacific League) to the second round of the CIF playoffs. He earned first team All-CIF recognition in Division II and is being honored as the All-Valley Player of the Year.

“I was always a strong supporter of his,” he said of the brother who is three years older. “Whatever he wanted to do, I wanted to do too.”

The 6-foot-5 middle blocker says his freshman year is one of his most memorable years because he got to play on the same team with his brother, then a senior.

He plans to go on to UC San Diego and major in environmental systems and credits his brother as well as all the coaches he has had in both sports for his success.

He was at his best when it mattered most, rounding out the regular season with 14 kills against Burroughs. He had 12 in a 3-0 first-round win over Quartz Hill and notched a season-high 23 in a 3-1 CIF loss to Foothill.
There aren’t nearly as many options for boys in the sport as there are the girls. Zetterberg didn’t have a ton of offers but selected a school that has a solid history both academically and athletically.

“It’s really too bad,” Claremont coach Bernie Wendling said. “He would have had 15-16 offers if he was a girl but there just aren’t as many options out there. He was just a dominant player.”

Zetterberg, who also excelled in water polo, said he didn’t think about the future when he first started in the sport. It was more about what he enjoyed.

“I really wasn’t thinking that far down the line,” said Zetterberg, who posted a .545 hitting percentage. “That was the sport that was the most fun for me so it’s the one I stayed with.”

COACH OF THE YEAR: Kevin Verkaik, Arrowhead Christian
This was the first season as head coach at ACA for Verkaik. He stressed team unity and positive encouragement, which resulted in ACA’s first Ambassador League title in four years. ACA reached the CIF-Southern Section Division 5 quarterfinals and finished the season with a 17-5 record, 11 of those victories were 3-0 shutouts.

Tim Olarte, Redlands, Senior, 5-10, Setter
Was one of the most seasoned players in the Citrus Belt League. Olarte dictated the Terrier’s offensive sets and led team to a second-place finish in the CBL. Earned first-team Citrus Belt League recognition, averaging 7 assists per set.

Trevor Mattson, Arrowhead Christian, Senior, 6-4, Opposite
Recovered from a preseason injury and helped ACA (17-5) win an Ambassador League title, the year ending in a thrilling quarterfinal defeat. Mattson missed much of the preleague schedule but still logged 173 kills and earned first-team All-CIF honors.