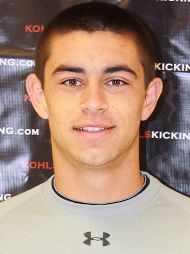 But University of Washington came in with a late offer and the Spartan senior ended up changing his mind after visiting the campus and the Huskies coaching staff over the weekend.

Vizcaino, an all Sierra League and first team All-Inland Valley selection, said he was originally slated to visit Washington the first weekend in December but that was right when then-coach Steve Sarkisian left for the USC job. He waited until the dust cleared before rescheduling that visit.

He got a good vibe from new coach Chris Peterson, who made the move from Boise State, as well as special teams coordinator Jeff Choate, who came in from Florida.

“I was set on Washington State but when this came up at the end of my regular season I thought I owed it to myself to at least think about it,” he said. “I felt bad having to tell a school I changed my mind but it’s part of the recruiting game. I had to do what was best for me.”