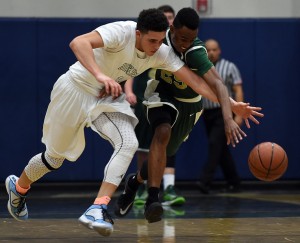 The Chino Hill boys basketball team is at a crossroad. And after tonight we’ll know a lot about what this teams is made of.

The Huskies are officially 3-13, 0-3 in the Baseline League after the forfeiture of nine games was made public on Thursday.

Tonight Chino Hills will host defending league champion Etiwanda (13-5, 2-1) at 6:30 p.m. The Eagles are a big enough challenge when you’re NOT facing adversity.

And the Eagles will be smarting a bit too after a last-second loss to Damien earlier this week so you know they’ll be fired up and looking for redemption as well.

Maybe its good the Huskies are facing one of the tougher foes. It leaves them no choice but to focus or it could be an ugly night. If they we’re facing a less challenging for there might be a tendency to just go through the motions and think they can get by.

The Huskies really can’t afford any loss now if they hope to finish in the top three in league and secure an automatic playoff berth.

They also really need a quality win to bolster their resume if they hope to gain a bid in the Open Division. It won’t look good, if in the worst case scenario, they go 0-4 vs. the other big two in Etiwanda and Damien.

How do you think the Huskies fare tonight?