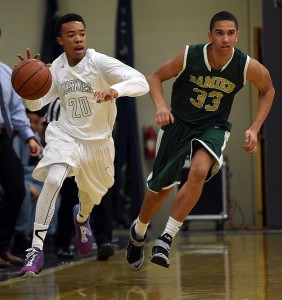 The talk all season when it comes to the Chino Hills boys basketball team has centered around who will emerge as a scoring threat after the talented Ball brothers – Lonzo and Gelo.

Those two were a big part of the Huskies run to an Open Division title game last year but all basketball enthusiasts recognize that Mark Williams, Bishop Mency and K.C. Cyprian were equally as responsible.

The those three graduated, so what now.

It has taken three-quarters of a season but maybe the Huskies have someone emerging in freshman Cameron Shelton.

He had 13 in the Huskies 67-63 overtime win against Etiwanda tonight. Included in that point total were three 3-pointers, all of which came at crucial times.

He is a freshman starting on a quality team, which pretty much tells you all you need to know. He didn’t have a very good game on Wednesday against Damien, but he bounced back nicely tonight.

He is the team’s third-leading scorer behind the brothers Ball. He also looks pretty poised on the court, even in pressure situations.

“He has a chance to be very special,” Chino Hills coach Steve Baik says. “We have already seen it at times. We just need him to be a little more consistent but the talent is there.”