Etiwanda freshman Julia Jimenez announced on Twitter that she has committed to play at the University of Michigan.

Jimenez received the offer from the Wolverines before even starting her first season as a member of the Eagles softball team. 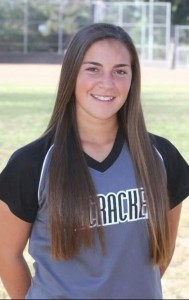 “It’s definitely overwhelming. It’s an honor and very humbling,” she explained in an email. “I am glad to see all my hard work and dedication pay off. The road only gets harder from here and now I have to work twice as hard.”

Jimenez, who was being recruited as a shortstop, stated that she also had full ride scholarship offers from Louisville and Texas A&M.

“It has been very exciting and stressful at the same time but it is a good stress at least,” said Gloria Jimenez, the mother of Julia.

Despite only being a freshman, she believes Michigan is the right place for her.

“It is a well balanced school,” Julia said. “All of the athletics, the education and the coaching staff.”

She made her verbal commitment over the phone with Carol Hutchins, the Wolverines’ softball coach.

“She said she would be honored to be my coach,”  Jimenez said. “She referred to me as a Wolverine and told me it is not about the size, but it’s the fight.”

Gloria believes the game of softball has really helped her daughter grow into the person she has become.

“It has really made her focus on her education, it has taught her life lessons and how to overcome failure,” Gloria said. “It has made her a stronger minded young lady and she is extremely confident on and off the field.”