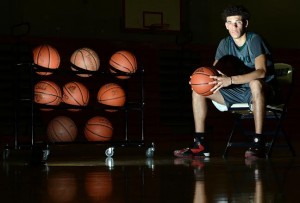 Senior guard Lonzo Ball, who has already garnered four national player of the year and a state player of the year awards, has been named Mr. California Basketball by CalHi Sports. He averaged a tripled double – 23.9 points, 11.3 rebounds and 11.5 assists, adding in 5.1 steals and 2 blocks a game.

He is the first state player of the year from the Inland Empire since current San Antonio Spurs standout Kawhi Leonard (Riverside Martin Luther King) in 2009. If you consider the San Gabriel Valley as part of the greater Inland Empire region along the 60-71 corridor, Ball joins Corey Benjamin (Fontana ’96) Casey Jacobsen (Glendora ’99) and Scott Williams (Hacienda Heights Wilson ’86) as winners of the state’s most prestigious honor from the vast region in the last 30 years.

In addition, CalHisSports named 6-foot-9 center Onyeka Okongwu the state freshman of the year. He averaged 7.9 points and 8.2 rebounds but upped that to 11 points, 9 rebounds and 7.4 blocks in the playoffs. His defensive presence was also evident in the number of shots he affected in the paint.

Here is the link to CalHi Sports players of year and link to overall player of year for those who want more information to see complete list of players honored.

Lonzo’s younger brother LiAngelo got recognition elsewhere. He was named second team “Junior Class” All-American by MaxPreps which picks All-American teams for each of four classes. He averaged a team-high 27.4 points with a best of 41 against High Point Christian (N.C.)