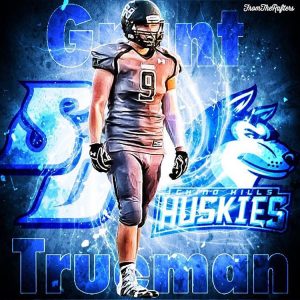 The 6-foot-4, 250-pounder has been to the school twice on unofficial visits but will take his official trip this weekend and probably sign then.

He also had offers from Ivy League schools Columbia and Cornell as well as Valparaiso and Stetson (Fla.), which are in the same conference with San Diego, and West Point.

“The campus there is unbelievable and the academics are second to none,” he said. “The football program is also very good so it had everything I was looking for.”

Trueman is a two-time first-team All-Baseline League selection and a two-time All-Inland Valley selection. Last year he managed 87 tackles, including 14 sacks. He was also the team’s kicker.

As a junior he was an integral player for a team that won a league title and got all the way to the CIF semifinals before losing to eventual champion Mission Viejo.

He singled out a win over Upland as the highlight of his senior season.

Trueman is also playing on the varsity basketball team which is undefeated.