The Southern California soccer community has been shaken by the death of Ayala girls soccer coach Matt Hodges and three others in an automobile accident Monday.

Here is the link to the Daily Bulletin new story on the accident.

Kaitlyn Arreola, who just completed her junior year at Chino Hills, had Hodges as a club coach for four years and expressed her sentiments.

“Matt always knew how to have fun and make a connection with us . He pushed our limits because he knew we had more potential . He was more than a coach, he was family . Everyone who knew him loved him and enjoyed his presence . He will be missed dearly and especially all us girls . We know he’s in a better place now .

“I will always remember whenever he saw any of his players he would run and give us a high five. Also, during practice he would just stop and start dancing to lighten up the mood when we were frustrated.”

“Matt was a great coach. He made me feel wanted and important as a player. I remember my freshman year he tried getting me to go to Ayala. He would try to bribe and tease me about the rivalry between Chino Hills and Ayala. He was taken from us too soon and I’m still in shock that he’s gone but he’s in a better place now with Papa Hodges.”

Hodges just finished his fourth year directing the Bulldogs. They were 36-46-10 in his tenure, the best season coming in 2014-2015 when they won the Palomares League, and advanced to the second round of the CIF playoffs before losing to Yorba Linda 2-1.

Chino Hills coach Andy Plascencia was still reeling from the news. He had a close relationship with Hodges over the last eight years from both club and high school ball. Hodges worked in the same Legends FC but also was head junior varsity coach for Plascencia in stints at both Chino Hills and St. Lucy’s.

“He really cared about his players, on and off the field. He always put their interest first.”

The Ayala softball team played in a CIF Division 3 semifinal playoff game today at Newhall-Hart. A moment of silence was observed before that game. 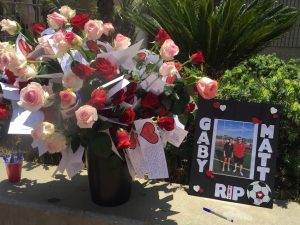 A display honoring the coaches at Ayala High School.