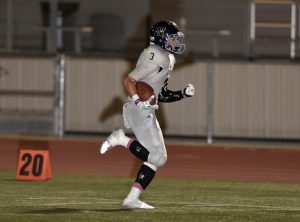 Ryan Place runs for touchdown last year in a game against Fairmont Prep.

It has been 25 years since The Webb School has won a league title in football. Could this be the year? Maybe. Of course every school starts the season with optimism and coach Amahl Thomas is one of those.

“I have had good groups of kids before but most of them were athletes from other sports,” said Thomas, now in his fifth year. “This is really the first year I have guys where football is their first sport and a priority.”

The Gauls were 4-6 overall and 2-3 in the San Joaquin League which put them fourth behind Saddleback Valley Christian, Santa Clarita Christian and Southlands Christian.

Senior Ryan Place heads the effort. He had to play quarterback out of necessity last season after the planned starter transferred. This season he is able to go to tailback which better suits him. He’ll also play some middle linebacker.

“He really is a great player but he has had some injuries, every year it has been something,” Thomas said, “:Hopefully he stays healthy this season and and can really show what he can do.”

Being a smaller school, many of the top players will have to contribute on both side of the ball. Among those are junior linebacker-tight end Simon Dawson, senior outside linebacker-wide receiver Spencer Easley and junior lineman Matt Martinez.

Thomas is also excited about the potential of junior Nick Johnson, who had to sit out half last season after a transfer from Glendora.

Depth will always be a factor, although he has 50 in the program, about 10 more than last year. The biggest question mark will be the right side of the offensive line.

The Gauls get the new season underway Aug. 25 against St. Pius, a new addition to the schedule. League play starts on Sept. 23 against Santa Clarita Christian.