A couple of Alta Loma High School graduates have had quite the start to the collegiate season at San Diego State.

Pruitt, who broke the Alta Loma single season scoring record and was the Inland Valley Player of the Year as a senior, was a huge factor in both Aztec victories.

In the 6-0 win over she tallied one goal and one assist.

Then at No. 16/17 Kentucky on Sunday, she assisted on both goals to help her team secure the 2-0 victory.

Meanwhile Moran continued her stellar play from a year ago when she was voted to the all-MW second team as a freshman. She started both games and was the only Aztec to play the full 90 minutes in each outing.

Yesterday’s Top 10 featured the top team performances of the past school year. Now it’s time to highlight the coaches, who don’t get nearly enough credit most of the time.

Naturally many on this list are ones from team’s we spotlighted yesterday. And yes it’s hard to narrow it down to just 10. I also wanted to include some that weren’t obvious choices, so here goes . . .

10. Ben Davies, Alta Loma girls soccer (24-5)
The Braves looked to be a true threat to win a Division 5 CIF title all season. Then star player Leah Pruitt went down with what looked like a season-ending knee injury vs. Montclair on Jan. 28. There was a brief hiccup the next game as the Braves lost to Colony. But they regrouped nicely, even without Pruitt to win the league title. Pruitt amazingly returned vat the end of the season and Alta Loma managed to get to the quarterfinal before losing to Palm Desert 3-0.

9. Jackie Robinson, Los Osos track
The Grizzles took five athletes to the state competition and four of those placed in a total of five events. There were two athletes in the throwing events but the other athletes were all in different events. Versatility indeed.

8. Luis Garcia, Don Lugo football (6-5)
This one might surprise people but the Conquistadores weren’t on anyone’s radar. They haven’t been good – 3-7 in 2013 and I picked them last this year. Well they went 6-4 under a first-year coach and were third in the Mt. Baldy. Only a 9-7 loss to Chaffey kept them out of second. The Conquistadores turned in an admirable performance in the playoffs, losing to perennial title contender Monrovioa 26-20 in overtime. They also took the Milk Can from local rival Chino which had dominated them as of late.

7. Christine Howard, Colony girls basketball (22-9)
The Titans went all the way to the Division 2A CIF title game before falling to South Torrance 57-56. They were the co-champion in the Mt. Baldy League with Alta Loma, splitting regular season games with the Braves. Colony also got that far with a balanced offense, not relying heavily on any one player. 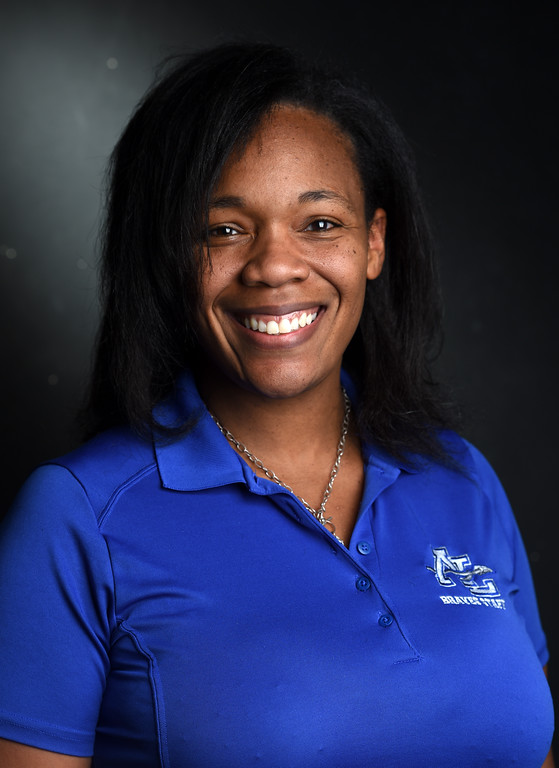 The Braves had no competition in the Mt. Baldy League so the toughest task for Pope was trying to find a way to keep her team sharp and focused when they didn’t have an equal. Teams that lack competition in the regular season frequently crash and burn in the playoffs – not the Braves who won a CIF title and finished as state runner-up.

5. Jason Schmelzeisen, Chaffey boys  soccer (22-2-5)
The Tigers had a tough task at hand just in Mt. Baldy League play and they finished first, not securing that outright title until a 4-3 overtime win against Ontario the final game of the regular season. That win also came despite playing a man down. Chaffey got to the Division 3 title game before falling to Cathedral 2-0.

4. Randy Bohlmann, Damien volleyball (26-7)
The Spartans won the Division 5 CIF title this season, getting past the quarterfinal for the first time in school history. Bohlmann started the program five years ago so he was the one laying the foundation. Now he is reaping the benefits. The Spartans also did a masterful job of shutting down a marquee player in the CIF title match.

OK, he’s one that could be on the list every year. And maybe the Eagles didn’t win the Baseline League for the first time in more than a decade. But it was how his team bounced back after that. His team beat both Chino Hills and Damien the second time through league play. It made a run to a CIF final that included a win AT Mater Dei and one over Sierra Canton to whom it lost earlier in the season. The Eagles stayed in the elite Open Division in basketball, losing a SoCal regional semifinal to LA Fairfax.

2. Keith Richardson, Pomona football (11-4)
Richardson had to right the ship and keep his team focused amid numerous distractions, the most notable being the dismissal of the head coach right before the playoffs. Richardson, then the defensive coordinator, took over and did just that. He was officially rewarded with the head coaching position.

The Spartans move from one league into the Baseline, probably the most competitive in all the Southern Section. And they win nine of 10 league games, finishing ahead of Etiwanda and Chino Hills. They lost a second round Open Division CIF game to Orange Lutheran but capitalized on the second chance and won a state title in Division 3 in that portion of the playoffs. A lot of coaches have trouble getting a team up for the state playoffs after a CIF run. No problem here. Some said the Spartans would have been better off in Division 3, a probable easy winner, and not in the Open. Dunn said, “Bring it On.”

When Alta Loma High School senior forward Leah Pruitt went down with a knee injury in the Mt. Baldy League opener against Montclair, the Braves were left reeling.

But they recovered and are making a run in the postseason.

Not only that, Pruitt, believed to be lost for the season, came back strong and is leading the charge, putting her name in the school record books as well.

When Pruitt got injured she was one goal shy of the school scoring record of 37 set by Michelle McConnell in the last 90’s.

Pruitt, who returned for the last league game of the season against Don Lugo, tied McConnell with Alta Loma’s lone goal in a 1-0 win in the playoff opener against Northwood.

She had one of her team’s three in Tuesday’s 3-0 win over Viewpoint. Her goal was the second of the three and it gave her the record-breaking 38th.

She will have a chance to add to that on Thursday when the Braves take on Palm Desert in a quarterfinal game at 5 p.m. at Chaffey High School.

A month ago Alta Loma girls soccer coach Ben Davies was trying to salvage a season. His team was ranked No. 1 in Division 5 but had lost star player Leah Pruitt to what looked looked like a season-ending knee injury.

The original prognosis was 6 to 8 weeks.

She returned last night and played 37 minutes in the regular season finale won by the Braves 3-0 over Don Lugo.

When she got hurt she was also one goal short of the school’s single season scoring record of 37 goals. She didn’t score yesterday but will probably have a shot at that as the Mt. Baldy League champion Braves (20-4, 8-1) head into the playoffs.

“She felt pretty good and her feet were good,” Davies said. “She as missing some of that explosiveness but that is to be expected.”

Davies admitted the injury might have helped his team in a few ways. Others got significant playing time in her absence so the team is better off for that.

There was a hiccup at first as the Braves lost to Colony the game after Pruitt got hurt. But they regrouped and gained some confidence in winning games without it star after that point.

The Braves slipped two spots in the poll to No. 3 behind La Quinta and Hemet. But they will be a force to reckon with in the postseason. 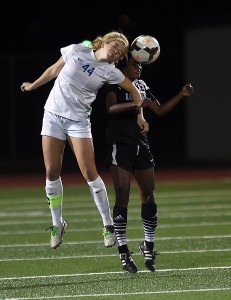