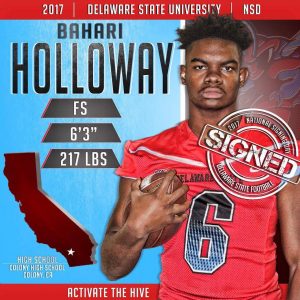 He also had offers from Youngstown State and University of San Diego and made trips to all three.

“From the first minute I got there is felt like a family atmosphere,” he said. “It’s a full ride so that’s a good thing. It just felt like the best situation for me.”

Holloway, a 6-foot-3, 210-pounder, did a little bit of everything for the Titans but will be playing safety in college. That suits him just fine. He grew up playing quarterback but moved to safety as a sophomore and adapted well.

“At safety you’re kind of the quarterback of the defense and you’re the last line of defense so I like that,” he said.

Holloway played for Colony as a freshman but transferred to Roosevelt his sophomore year with some family issues factoring in. He came back to Colony as a junior but never played because of paperwork and CIF clearance that was necessary.
He thinks not playing as a junior hurt but is happy with the opportunity he has now. He plans to major in photo journalism of possibly graphic design.