Right-handed pitcher Michael Gomez of Upland High School is among the eight players signed by the baseball program at Division I Cal Poly San Luis Obispo.

Upland was 16-10 in 2013, finishing tied for third place in the Baseline League and qualifying for the CIF-Southern Section playoffs.

Last summer, Gomez participated in the Area Code Games and he has played summer ball for the San Gabriel Valley Arsenal.

Senior libero Cynthia Giron of Rancho Cucamonga set a career record for digs with 539. That breaks the old mark of Jordan Ortega who had 491
.
Giron actually broke the mark in the Cougars first playoff match against West Covina, then added to it with the second round and quarterfinal matches.

“She was a very big part of our success,” Cougars coach Aaron Flores said. “I don’t know where we would have been without her.”

Giron ranks 14th in all the Southern Section, averaging 6.1 digs per set.

It was quite the closing act for Upland senior wide receiver Trevor Wright.

He didn’t just have a good night in the Highlanders 24-6 Baseline League upset of Rancho Cucamonga. He had a great night when coach Tim Salter needed him most.

Wright and fellow receiver Marquis Wimberly were called on to play defensive back too because starting DBs Joseph Ayala and Jeff Farrar were two of the three players suspended by the CIF on Thursday because of an altercation in the game against Etiwanda last week.

He hadn’t played there at all this year, although he did start every game there last year as a junior. Well his name was called all night. He was part of the reason the Cougars scored only six points all night.

On offense he had five catches for 73 yards, including a 20-yard reception in the first quarter for the games first score. He also had a 33-yard catch in the third quarter that set up a Luke Van Ginkle field goal that made it 17-6.

For good measure he threw a touchdown pass to quarterback Tyler Hilinski on a trick play that rounded out the scoring.

Earlier this fall Salter said he was surprised Wright hadn’t drawn more interest from Division I schools – maybe because he’s just 5-10 and he’s not blessed with blazing speed. But he does everything right. College scouts just need to check out that game film and see for themselves. 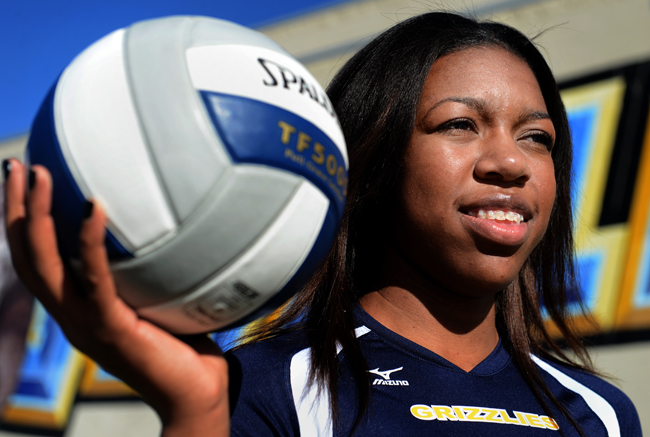 Senior Ashten-Smith Gooden of Los Osos High School has been named to the 2013 Under Armour High School All-American team.

The 6-foot-2 outside hitter who is headed to Cal, is hitting for an impressive .482 perentage, ranking her sixth in the Southern Section in that category. She has 382 kills, an average of 5.5 per game.

The Under Armour team consists of 90 players from 33 states, with a 45-player first team and  45-player second team. Each player on the First Team will be invited to play in the Under Armour All-America Volleyball Match & Skills Competition at Key Arena on Dec. 20 in Seattle, Wash., in conjunction with the 2013 AVCA convention.

Requirements for nomination were that the student-athlete be in her senior year of high school, that she be nominated by her high school coach, that her coach be a member of the AVCA and that her individual season statistics versus all opponents for the entire season be entered into MaxPreps, a free service that aggregates and distributes data on high school sports.

Before the season started most people thought when it came to prep volleyball it was Los Osos, then everyone else. In fact, that’s exactly how one coach put it.

Well that turned out not to be the case as Rancho Cucamonga was the team that marched through Baseline League play unscathed. Well they have two matches left but those are just a formality.

The Cougars beat their rival twice – 3-0 and 3-1. Both were convincing.

Player for player Rancho didn’t measure up but the Cougars made up for that with all the other intangibles it takes to make a great team. Kylie Miller is just a great all-around player. She can hit, she sets, she can pass. And she has a serve that is nearly impossible to return. She has a solid cast around her too.

For Los Osos this will be a gut check. The Grizzlies will still make the playoffs and they will, no doubt, be a very formidable foe. They had won the last three titles before being dethroned. Sometimes you can win so much you can get complacent. And they do have probably the best player in the area in Ashten Smith-Gooden.  They’ll be just fine too. But Rancho winning only adds to what is a great rivalry . . . in pretty much every sport. 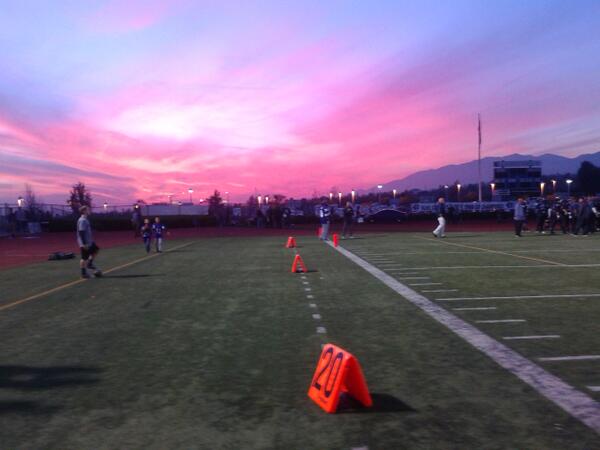 There are big games at all levels all the time. About half the time they live up to their billing. But the showdown between Los Osos and Rancho Cucamonga sure did. No. 1 Rancho won 20-16.

Give the Grizzlies credit. Despite playing without quarterback Jason Crain the Grizzlies (4-4, 1-2) gave the undefeated Cougars (8-0, 3-0) all they wanted and more. Donovan Williams, normally a running back, filled in admirably and kept his team on top until the very end. It looked like they were going to pull off a major upset that was going to turn the Baseline League upside down.

Oh the quarterback drama! Nick Baiz has two and had a decision to make. Use sophomore Angel Matute who has been the guy the last month with Gage Pucci injured. Or go with Pucci who was healthy enough to start.

He went with Matute, which was probably the right call. When Matute struggle he went to Pucci in the second half. Another right call.

Pucci then led a resurgence. He got the Cougars in striking distance, closing the gap to 16-13 with a touchdown pass to Blake Fisher – the other hero.

Then he went down with the Cougars driving in the final minutes. Cougars at the Los Osos 20. Back comes Matute, who responds by throwing the winning pass to Fisher with 1:14 left.

It says a lot about Matute’s character.

The prep football game between Glendora (6-1, 1-1) and visiting Etiwanda (4-3, 1-1) scheduled for Citrus College has been move to Charter Oak.

The move was made necessary due to a major power outage on the Citrus College campus. Kickoff is still set for 7 p.m.

It’s a big game for both teams who are battling for a playoff berth in the Baseline League.

It is unusual to get to Week 7 in prep football and have two unbeaten teams going head-to-head. But that’s what we’ll have on Friday when Glendora squares off against Rancho Cucamonga at Los Osos High School at 7 p.m.

Some compelling numbers to ponder. Glendora has won a lot of close games, with the total margin of victory in those six being 23 points – four decided by a field goal or less and the largest deficit being eight points.

It’s the opposite for Rancho Cucamonga who has won its six by a whopping 130 points. Just one close call – 32-29 over Bishop Amat.

So does that mean Glendora has played the tougher schedule? Well no. Glendora’s opponents are a combined 16-21 this season while Rancho’s are above .500 at 20-18.

Glendora has beaten one foe with a winning record (Bonita) and two that are .500 – Ayala and Upland.

Rancho has beaten three teams with winning records (Amat, Murrieta Valley and Etiwanda) and one who is .500 (Norco). Of course Glendora could also argue that a couple of its foes, namely Upland and Charter Oak, are better than their record might indicate because of they schedules they have played.

Those numbers might indicate the edge goes to Rancho Cucamonga if you’re trying to pick a winner. But it also means Glendora has made the clutch plays when it needed to and that makes for a dangerous opponent.

Hope the games lives up to its billing!

Soccer standout Lauren Flowers of Rancho Cucamonga High School has made a commitment to University of Houston.

Coach Chris Van Duin says a couple of players have visits this weekend to the University of Great Falls. They are seniors Serafina Robles and Sandralee DeVille.

The defender had her pick of just about any college in the country but narrowed her choices to Oregon and USC.

She is part of the prestigious Olympic Development Program and is in the pool for the U.S. National team for her age group.