It is always fun to look back when a school year is over and reflect on the individuals and teams that made it a memorable run.

So just for fun here are athletes I’ll miss covering next year. Nothing against those not singled out here because I have enjoyed my interactions with all the coaches and athletes in the Inland Valley.

But there are some that have been so successful since their freshman year I have had more dealings with them then most. So here goes.

Bryce Peters, Damien basketball
He was a key player as a junior in helping the Spartans to a state championship but probably didn’t get the credit he deserved because of the more heralded seniors around him. This year he excelled in a starring role and it was nice to see him flourish in that role. He’s headed to Colorado State.

Kylie Miller, Rancho Cucamonga volleyball
She was a four-time first team All-Inland Valley selection and that’s an accolade very few can claim. There are few athlete more humble or soft-spoken but her talent did the talking. The Under Armour All-American is headed to UCLA.

Josh Thompson, Colony football
Grabbed the starting job early his sophomore year and never gave it up, leading Titans to a CIF title as a junior. Oh, and he did that in the title game after missing a month with a separated shoulder. He is about as tough as they come. I will never forget a Pomona player grabbing him by the face mask with such ferocity it turned the helmet all the way around. He got up without skipping a beat and was ready for the next play. He’s headed to Dixie State.

Jacob Beltran, Upland baseball
How can you not root for a kid that had brain surgery and went from having to learn to walk again to returning to the playing field in seven months. We have all heard the tragic stories of athletes who collapsed on the playing field and didn’t make it. So it is nice to have a happy ending. He’s probably headed to a community college, since he missed is entire junior season.

Mikey Dean, Chaffey football/track
Who doesn’t love Mikey Dean? Guys that small shouldn’t be able to do what he does both on the football field and the track. Rushing for a ton of yardage is one thing. But taking up a new track event – long jump – this year and then placing at state in California which has so many elite athletes. Well, that pretty much says it all. He is headed to Idaho State where he’ll compete in both sports.

Lonzo Ball, Chino Hills basketball
There isn’t much to say that hasn’t already been said. I have been covering high school sports for 30 or so years (yes I am aging myself) but I have never enjoyed watching a player or a team as much as I did the Ball and the Huskies. The last thing I remember close was seeing Deion Sanders in high school in my Florida tenure. I definitely don’t remember the last time i saw an athlete with such a complete skill set at such a young age. Can’t wait to see Lonzo doing his thing at Pauley Pavilion for the UCLA Bruins. 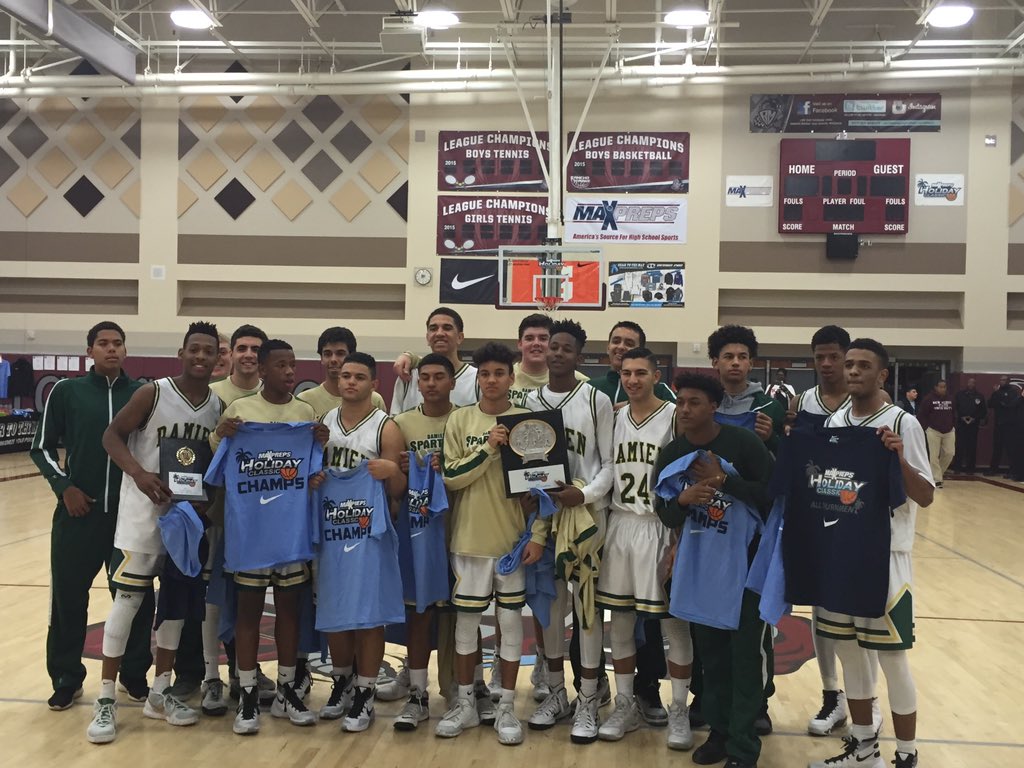 The Damien basketball team registered a 74-60 win over Villa Park in the championship game of the MaxPreps Holiday Tournament.

The Spartans, who ran their win streak to five games, improve to 14-1 with the victory.

They play in the Ron Massey Classic at Long Beach Jordan starting Saturday.

Damien basketball Bryce Peters has made a verbal commitment to Colorado, doing so following a visit to that school last week.

“I got there and really just felt a positive energy everywhere around me,” he said. “It was from the coaching staff on down in the community. It was different from other places.”

Peters had a final six that also included Wyoming, Utah, Kansas State, UNLV and Grand Canyon. Wyoming and UNLV were the options that came closest to Colorado.

Peters, a 6-foot-4 guard, is looking for playing time immediately.

“I was the only guard they recruited. They went after big men. So I am looking forward to getting in there and playing,” he said.

Peters averaged 14.4 points, earning first-team All-Baseline League honors and teaming with Jeremy Hemsley and Malik Fitts to give the Spartans three double-figures scoring options. Among his top performances was a 20-point showing in the Southern California Regional final win over Cathedral. Also had 22 in first win over Chino Hills.

He is one of few returners from a team that won the Division 3 state championship and is eagerly awaiting his senior season.

“The decision is out of the way so I can focus on school and my senior year,” he said. “It’s going to be pretty exciting.”

Damien High School senior Bryce Peters admits he has been caught a little off guard by the college recruiting process. He got his first offer as a freshman and it was from UTEP. By the end of his sophomore year he had nine.

But now the Spartans standout has more than 20. Chalk that up to a good showing in travel ball as well as Damien’s run to the Division 3 state championships earlier this spring.

“It has just kind of exploded,” he said. “I am thankful for the opportunities but it has been a little overwhelming at time. My phone is blowing up and it seems like every week there is a new school calling me.”

Peters has gotten a lot of help through the process from his parents, as well uncles Tracy and Cameron Murray.

He has visited Wyoming and Utah and will travel to UNLV next week while Colorado is on the schedule for Sept. 10. He has yet to schedule Kansas State but plans to do so.

He has had unofficial trips to others including USC and Pepperdine and looked around at Cal when the Spartans where there to play in the state title game in March.

He plans to major in architecture so that will play a major role in his decision.

He would also like to play in a program where hard-nosed defense is a focal point.

“I know what hard-nosed, tough defense is,” he said. “You play as much basketball as most college players have and everyone can score. But not everyone can go out there and play great defense.”

As to the rumors that Peters was considering transferring to Findlay Prep in Las Vegas? Well they were true. But Peters decided to stay put, mainly because it his senior year and the talks he had with Mike LeDuc, who replaced Matt Dunn who accepted the same position at St. John Bosco.

With the core of the Spartans title-winning team having graduated, Peters looms as the marquee player.

“If it wasn’t my senior year I probably would have done it,” he said. “But everything works out and I’m excited about this coming season. People are underestimating us because of the players we lost, but we’ll be ready.”