Etiwanda baseball standout Matt Bardowell just wrapped up his freshman season but he already knows where he wants to play in college  – USC. He made a verbal commitment to that school today.

He says is twas his dream school all along so he didn’t need to wait to see what other offers night roll in.

“One of the first games, maybe the first game my dad ever took me to was USC,” he said. “I have loved the school all along. It also really seemed like the perfect fit so when I got the offer I wanted to jump on it.”

Bardwell was a versatile player for the CIF Division 2 champion Eagles, pitching and playing first base. He said USC will take him as a two-way player although he likes to pitch because he can be “in control of the game.”

Bardowell started this season as a freshman, hitting .381 with 20 RBI, 21 runs scored, five doubles, two triples and four home runs. On the mound he went 2-1 with a 2.74 ERA in six appearances.

Bardowell has been to the school on an “unofficial” visit and also made trips to San Jose State, San Diego, San Diego State, Arizona State and Arizona,

He plans to pursue dental school ,which also factored into his decision.

“They have a very good dental school so that was important to me too. Not just baseball,” he said, “It was a good fit all the way around.”

Another one has been bestowed on Etiwanda senior shortstop Tyler Freeman. Freeman has been named to he ABCA/Rawlings All-American team, one of just 13 players chosen nationwide to the first team.

He hit .526 with 35 runs scored, 36 RBI, eight doubles, four triples, four home runs and 18 stolen bases. His on-base percentage was a robust .638 and his slugging percentage .814 in leading the Eagles (27-3) to their first CIF championship.

His consistency was also impressive, as evidenced by the fact he got at least one hit in 28 of 30 games and recorded multiple hits in 17 games with a best of five coming against Chino Hills in a regulation game. He struck out just six times all season.

Freeman has signed with Texas Christian but was drafted in the second round by the Cleveland Indians earlier this month so he’s weighing the decision of going to college or pursuing professional baseball.

Here is the link to Rawlings release with list of players honored.

The Etiwanda baseball team will be honored at Angels Stadium in pre-game festivities on Friday before the scheduled game against the Kansas City Royals,

Several other teams winning CIF titles will also be saluted.

The Eagles (27-3) finished off a storybook season by beating Palm Desert 2-1 for their first CIF Southern Section title, this coming in a very competitive Division 2.

Coach Don Furnald’s team started the season 1-2, then won 26 of the next 27 games, the lone loss in that stretch coming in Baseline League play to Los Osos 3-2. Two of the team’s three losses were by a run.

“It will be a lot of fun for our kids, something they will always remember,” he said.

Etiwanda High School pitcher Marcus Johnson is just a sophomore but he already has his mind made up when it comes to college. He is committed to Duke.

It came down to athletics and academics. He plans to major in mathematics.

“I wanted to have a degree that if baseball doesn’t work out will pay off for me,” he said. “It’s a good school and it’s the ACC so the baseball is good. It was the best of both worlds.”

Johnson took an unofficial visit to the school in February. He also visited Pepperdine and was talking to other NCAA Divsion I’s in Virginia and Oregon State.

He didn’t see the need to wait and longer to see if other offers would come along.

“I have heard some people say commit, commit and others say wait,” he said. “I always told my parents if I found the right school that fit athletically and academically I’d pull the trigger.”

The Eagles (22-3) have completed the regular season and start playoff action next week.

It has been quite a week for Etwianda baseball standout Steven Rivas. On Monday he was named the Daily Bulletin Male Athlete of Week, then he won the on-line voting as overall So Cal Prep Legends Athlete of Week.

He topped that off over the weekend by committing to Long Beach State. 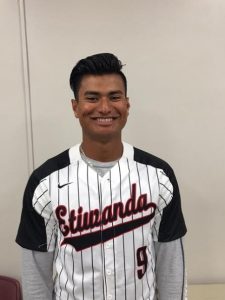 It was the only school he visited but other such as Division I Texas Christian, Hawaii and San Jose State as well as local Division II powers Cal Baptist and Cal Poly Pomona were also interested.

“I had a great conversation with a counselor there and I heard about everything they had to offer,” he said. “Then as far as baseball, I think I’ll have a chance to go in there and play. I liked the environment and it felt like the perfect fit.”

There is another bonus that goes with that commitment. Teammate Chris Jimenez will also be going there.

“We have known each other since we were 5,” Rivas said. “It will definitely be nice to have someone there with me that I really know and get along with.”

Rivas has helped the Eagles to an 9-2 record thus far. He is hitting .575 with 13 RBI, five doubles, two triples and two home runs. 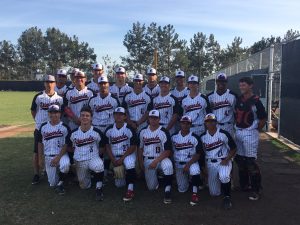 The Etiwanda baseball team collected 17 hits and cruised to a 15-2 victory over Chaffey in the championship game of the Cougar Classic on Friday at Rancho Cucamonga High School.

The beneficiary of the last offensive outburst was starting pitcher Marcus Johnson, who went four scoreless innings, giving up just one hit. He won two games in the tournament.

The outcome was hardly in doubt after Etiwanda pushed across three in the first inning, three in the second and five in the third to take a commanding 11-0 lead.

Chaffey’s two runs came in the fifth inning. The Tigers (6-2) had a good tournament with quality wins over Carter and Rancho Cucamonga to get to the championship game.

The loss of Freeman was the biggest disappointment in the stellar showing. Coach Don Furnald said his sophomore second baseman was hit in the face by an 87-mile per hour fastball in Thursday’s semifinal. He feared Freeman had broken his jaw. That was not the case but Freeman did need oral surgery.

Furnald said he has no idea when Freeman will be able to return.

Etiwanda High School pitcher Michael Berg will continue his education and play baseball at Trinity International, just outside of Chicago.

Berg was 6-3 with a 2.31 ERA in 12 appearance (10 starts). He pitcher 76 innings and managed four complete games in helping the Eagles to a playoff berth. He was a first-team All-Baseline League and All-Inland Valley honorable mention selection.

“I like the coaching staff and the atmosphere,” he said. “I thought it would be the best place for me to develop as a baseball player.”

Berg was also considering Biola or going to Grand Canyon University and just focusing on academics. He plans to major in accounting.

Berg hasn’t visited the school but has several friends that are going there so he has gotten a full scouting report on the school. He has another friend in Brady Lange, who just graduated from La Verne Lutheran, who will be going there as well and told the coach there about him.

Etiwanda High School shortstop Tyler Freeman has been chosen to participate in the Perfect Game All-American game to be held at 5 p.m. on Aug. 14 at Petco Park in San Diego.

The event will be broadcast live by the MLB Network.

“It’s an honor to be chosen and I am very excited,” he said. “It’s one of those things you dream about.”

Freeman, who has committed to Texas Christian, just rounded out his junior year with the Eagles. The repeat first-team All-Inland Valley selection hit .388 (33 for 85) with 29 runs scored, 17 RBIs, 11 doubles, 3 home runs and 13 stolen bases.

Freeman was chosen based on his showing in Perfect Game sponsored events. He plays with the California Baseball Academy.

He competed in a recent showcase in Florida and credits his performance in that for helping land him a spot.

There has been no time off since the spring season ended for Freeman. He has a tryout for the Area Code games tomorrow at USC and will be headed to Arizona for another travel ball event later this month.

“I really haven’t had a day off but that’s OK because I love playing the game,” he said. “You don’t need a day off when you love what you do.”

Here is link to rosters of players chosen for the game.

Etiwanda High School junior catcher Chris Jimenez got an offer he liked so he isn’t waiting. He has made a verbal commitment to Long Beach State.

Jimenez made an  unofficial visit to the school and also took trips to UC Riverside, Tennessee and Texas A&M. The fact that Long Beach is close to home and has a solid were bonuses.

“The campus was nice and I really fell in love with it,” he said. “They made me a really good offer and I couldn’t pass it up.”

Jimenez helped the Eagles to a 19-7 record and 10-5 mark in the Baseline League which was good enough to tie for first place with Chino Hills. He hit .267 with 5 doubles, a home run and 18 runs and is also noted as a good defensive catcher.

Jimenez plans to major in something business related.

Athletic talent runs in the family as sister Julia has committed to Michigan for softball.

VIDEO: Baily Falter talks about his outing vs. Etiwanda

Bailey Falter returned from a nearly one-month layoff and pitched the Chino Hills Huskies to a 4-3 win over Etiwanda on Saturday in the second game of the Battle of the Baseline at LoanMart Field.

The three games between the teams this season were decided by a total of four runs.

Falter went the distance on the mound and struck out nine, including the side in the seventh. He gave up four hits, two of those coming in the third when Etiwanda manufactured two of its three runs.

Chino Hills went ahead for the first time with three in the bottom of that inning. Justin Bardwell doubled home a run and Elijah Greene got home another
with a sacrifice fly.

Jason Wallace stroked a towering home run to left for Etiwanda to tie it again in the sixth.

That tie was short-lived as Chino Hills got the decisive run in the bottom of the frame on a bunt single by Just Chavez.