Eagles coach Dave Kleckner confirmed that McLaughlin, who has signed with USC, has a torn labrum in his left shoulder that will require surgery.

He had an MRI on Monday and is in the process of scheduling that surgery. He wants to have it as soon as possible so he can get through the rehabilitation process in time to start is collegiate career in the fall.

McLauglin injured his shoulder driving to the basket in the second quarter of a 59-48 loss to Chino Hills in an Open Division quarterfinal on Feb. 28.

It was an aggravation of the same injury that knocked him out of a few games in December.

Etiwanda will play at El Camino Real on Friday in Southern California Regional of the state playoffs.

All of the game’s Kleckner’s teams have lost came without McLaughlin but all were close.

Everyone knew that the Baseline League showdown between visiting Etiwanda and Rancho Cucamonga in boys basketball was going to be one for the ages. How can it not be with two teams both ranked in the top six in a very competitive division?

Rivals located about a Tiger Woods tee shot apart geographically. Each team led by a superstar player – that would be Jordan McLaughlin for Etiwanda and Victor Joseph for Rancho Cucamonga, both senior guards destined for great things in the future.

The game lived up to its billing with the Eagles prevailing 61-56.

It was a great atmosphere! Both crowds were into the game, even before the tip off, cheering the players as they took the floor for warm-up. Spectators on both sides were standing much of the game, especially at crunch time down the stretch.

Music blared during timeouts, fans sang and danced. Everyone was well-behaved, cheering their team and not jeering the other.

The only thing slightly unsportsmanlike – the Rancho Cucamonga faithful chanting “You’re a Trai-tor” each time Etiwanda junior center Jordan Naughton  went to the free-throw line. He transferred FROM Rancho. But that’s not that bad!

School administrators were ready for the crowd, with plenty of security on hand . . . just in case. Crowd flow in and out of the building was organized. Lessons were definitely learned from the debacle that was the post-game melee in football when Rancho played another local rival, Los Osos.

So hats off to crowds from both schools, school administrators and everyone else involved in making it a memorable night. 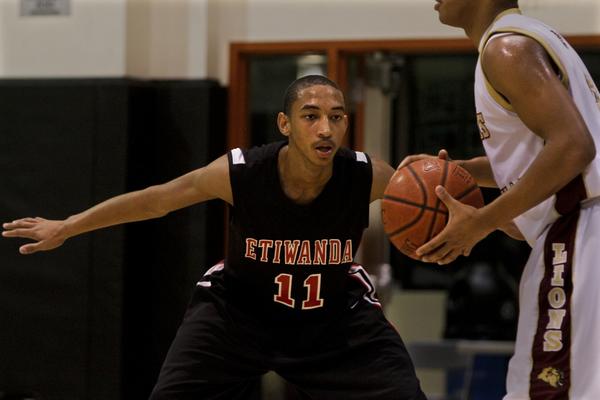 Etiwanda boys basketball coach Dave Kleckner expects to have his star player Jordan McLaughlin back in the lineup when his team opens Baseline League play on Friday against Los Osos.

McLaughlin, who has signed with USC, sustained a slightly separated shoulder in a Dec. 27 game Sacramento Capital Christian in the Maxpreps Tournament in Palm Springs. The Eagles (13-3) lost that game and two of the three others they played without him.

“The pain has subsided and we’re expecting him back,” Kleckner said. “It definitely could have been worse.”

Kleckner said his marquee player was injured going to deflect a shot.

VIDEO: McLaughlin’s free throw and steal wins it for Etiwanda

There were a lot of things that happened in the Etiwanda-Chino Hills game. Here are some of my thoughts:

Do you want to get your fill of high school basketball? Well this is your week as the Inland Empire  Classic gets underway at several area high schools.

The will be 24 teams competing, beginning with pool play. each pool has three teams. Later in the week the winners of each pool advance to elimination play.

Here are the pools and schedule: