Stan De Lus is expected to be named the next head girls basketball coach at Etiwanda, replacing Anders Anderson who directed the Eagles for eight years.

De Lus, 42, was chosen from a wide pool of applicants. His formal appointment is pending school district board approval which should come later this week.

“This is a dream job for me,” DeLus said. “I want to continue what has been done here in the past. If it’s not broke you don’t have to fix it.”

Anderson’s teams were an impressive 185-37 overall, highlighted by a 69-1 record in Baseline League play. That loss came to Rancho Cucamonga in Anderson’s first league game as coach so DeLus inherits a 69-game league win streak.

De Lus went through an exhaustive interview process but was Anderson’s choice to follow him. He brought De Lus on to his staff last year in hope that the job would be passed to him next. DeLus coached Anderson’s daughters in travel ball with West Coast Premier so the two had a long-standing relationship.

Schools prefer to have their coaches on staff full-time if at all possible, particularly when it comes to the major sports. De Lus is not but was deemed the best candidate.

“They definitely made me earn it but that’s fine. I wouldn’t want it any other way,” he said.

DeLus, a 1993 graduate of Claremont High School, has experience at the high school and college levels. He was an assistant at Mt. SAC under Brian Crichlow from 2010 to 2016, being part of three state championship teams.

He also made the Division 1-AA championship game as head coach Canyon in 2006 and the Division 4-A title game as an assistant at Oak Park.

De Lus will take the same blueprint that made teams before his successful. Anderson has been known to play a difficult schedule and De Lus plans to even step that up a notch.

He plans to use the balance of his roster and develop talent from top to bottom the same way Anderson did with the main difference being that he plans to go a little more up-tempo at both the offensive and defensive ends of the floor.

“We’re a little more guard oriented,” he said. “That’s going to be the strength.”

There will be some holdovers from Anderson’s coaching staff as well as some newcomers. Brant Morphew will be back and serve as head junior varsity coach with Mike Jackson one of the varsity assistants.

Newcomers include Brittany Lewis, a former player at Etiwanda, who will head the freshman team and Brandy Fletcher-Daniels, a former standout at Cal Poly Pomona who will serve as Director of Basketball Operations and be a varsity assistant.

Wayne Caffey, who has coached at Diamond Ranch and Jurupa Hills, will also be a new varsity asisstant.

The Etiwanda girls basketball team is one of those that fell short of a CIF Southern Section championship but gets new life in the state portion of the playoffs which begin this week.

Sometimes coaches find it hard motivating a team for another run after they just had one but Eagles coach Anders Anderson says his team welcomes the opportunity. 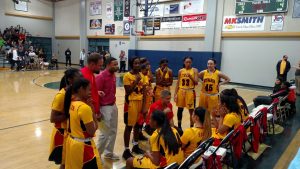 “We have a younger team and we’re still hungry,” he said, “They definitely look at this as a chance to make for an earlier exit from the playoffs than what we wanted.”

Etiwanda was seeded second but lost the Section Open Division semifinal 60-49 to Harvard-Westlake which in turn lost the championship game to top seed Long Beach Poly.

The other reason Anderson and his team are looking forward to a shot at redemption – it will be his last hurrah.

Anderson has said this will be his last season coaching and he has already told his team. He made that decision even before the season started.

The biggest factor is the geographic distance between his children whom he would like to see compete in their respective sports. Daughter Alyssa is playing basketball at UNLV and son Aiden is playing college football in Canada.

Another son Alec is a junior at Etiwanda and he competes in football and wrestling.

“Our family dynamic has changed,” he said. “I want to be able to watch the kids in their sports and my wife and I would like to do some of the things we haven’t been able to do to this point because I was busy coaching.”

Anderson is one of the area’s most successful coaches with a record of 185-37 (.833) that comes despite playing a difficult schedule. His teams went a combined 79-1 in league play and he’ll hand over a streak of 69 straight league wins to his successor.
He took over a good program and helped it to the next level.

“This really was the right time,” he said. “I have enjoyed it but the dynamic in the game is changing too. It’s probably a good time for a younger, more energetic person to take over.”

Etiwanda girls basketball coach Anders Anderson admits he has been lucky in his coaching career that he hasn’t had to deal with many significant injuries at crucial times. But the Eagles are a bit hobbled at the moment.

One game after a convincing upset of Mater Dei, the Eagles were handled in an Open Division quarterfinal by Chaminade 82-54. Three players departed that game early, most notably senior point guard Dominique McLaughlin who severely sprained an ankle on the first play of the game under the Etiwanda basket.

McLaughlin, the team’s leading scorer and floor captain, tried to come back twice but was eventually carried off the floor after the game.

She did not play on Saturday in a 54-43 loss to Serra in a consolation quarterfinal and is likely done for the season, according to Anderson.

Senior Alize Williams aggravated an existing knee injury against Chaminade and tried to play against Serra but had to come out of the game early too.

The injuries had a definite effect as the Eagles lost to a team they defeated during the regular season, although that one was close, 51-46.

The Eagles will have a much needed week off before resuming play in the state portion of the playoffs. Anderson knows both players are going to want to play and it will be a judgment call on his part.

“They’re seniors and the last thing they want to is to have their career end sitting on the bench,” he said. “They’re also bot pretty tough and they’re going to tell me they can play but we’ll see.”

END_OF_DOCUMENT_TOKEN_TO_BE_REPLACED

The CIF will announce the Open Division bids for basketball at 3 p.m. on Friday. There probably won’t be any drama when it comes to what local teams are selected.

The Baseline League teams all play their last game today but those won’t change anything.

Damien (22-3, 8-1) is a shoe-in. The Spartans finished first in the difficult Baseline League and took three of four head-to-head meetings with premier teams in Etiwanda and Chino Hills. That’s reason enough to include them. But they also have some quality wins out of league to bolster their resume.

Etiwanda (19-7, 7-2) finished second to Damien. The Eagles also beat both Chino Hills and Damien the second time through league play after losing the first time to both. Like Damien, Coach Dave Kleckner’s team has played a top-notch schedule.
And heck, they’re Etiwanda. History alone would indicate they’re deserving.

Chino Hills (9-15) will likely end up third in the league. Yes there was a matter of those nine forfeits. But the Huskies had a great run in the Open Division last year, advancing to the final before losing to Mater Dei. They have played national caliber schedule. And they have a marquee attraction in Team Ball. They’re going to be in, even if they end up fourth.

On the girls side the lone team that should get in and will is Etiwanda (15-6, 9-0). The Eagles are a perennial title contender on the girls side too. Even though Coach Anders Anderson graduated nine players, he’s still loaded. And he has probably played the most difficult schedule of any team anywhere.

Despite graduating so many players the Eagles still won every league game by 20 points or more. Yes they have a game left but it will be a win. They’re in too.

Etiwanda High School basketball standout McKynzie Fort signed with the University of Oregon during the early signing period last fall. But the talented guard was granted a release from that school and is now headed to San Diego State.

Fort, the Inland Valley Player of the Year, said the decision came down to family. She has had several deaths in the family in the last two years and hasn’t had the time to come to terms with so many losses and thought a school closer to home was in her best interest.

She said the decision had nothing to do with the coaching staff or players at Oregon.

“After really thinking about it, I didn’t think that was the best fit for me,” Fort said. “I talked about it a lot with my family and this was the best decision.”

Fort said she had been to San Diego State on an unofficial visit before she signed with Oregon but it had a previous coach and staff in place. She talked to a handful of schools after getting her release and Etiwanda coach Anders Anderson dealt with a handful of others.

Fort was also the Most Valuable Player of the Baseline League.  She shot 54 percent from the field and averaged a team-high 15.6 points, 4.3 rebounds, 3.2 assists and 2,.3 steals despite playing a gauntlet of tough nonleague and postseason foes.