Former Etiwanda High School basketball standout Kameron Edwards of Pepperdine will be going to Italy with a group of players from Athletes in Action.

The 6-foot-6 forward is coming off a stellar freshman campaign in which he earned All West Coast Conference Freshman honors. He averaged 7.2 points and 4.2 rebounds, starting 28 of 32 games.

In the classroom, he achieved West Coast Conference Commissioner’s Honor Roll “bronze” honors and was a Pepperdine Scholar-Athlete.

“I’m really looking forward to meeting everyone and bonding with the guys in beautiful Italy,” Edwards said. “I know that we’ll be doing a lot of traveling and sight-seeing with workouts and four games. Coach (Marty) Wilson first gave me a call about it in May, and it still feels surreal. I’m excited that this will happen. I think it’s a good opportunity to play against some good competition, work with new people and expand my game.”

The team will gather at Mercer University on Aug. 9 for training camp and leave three days later, returning Aug. 20.

The squad is currently scheduled to play four games, two against Italian teams and the others against teams from Lithuania and Kosovo. They will visit the Italian cities of Milan, Venice and Como.

The team is coached by Mercer’s Bob Hoffman and includes 10 student-athletes, nine of which play at the Division I level.

Athletes in Action’s aim is to spread the Christian message through sport. In addition to giving team members a memorable basketball and cultural opportunity, they’ll also have the chance to spread their faith.

The Etiwanda boys basketball team has been among the state’s elite under the direction of Dave Kleckner.

The Eagles struggled a little earlier this year, likely because they were working through some growing pains after graduating their go-to player the previous few years in Jordan McLaughlin.

A scarey thought for future foes – the Eagles are clicking on all cylinders now.

The lost to both Damien and Chino Hills the first time through Baseline League play. They crushed both the second. They may have been dethroned by Damien but they have shown they’re stilla force to be reckoned with.

Senior Kameron Edwards, who has signed with Pepperdine, is leading the charge and has emerged as that go-to player. Then there’s the consistent contribution of another senior Delewis Johnson.

They’re not a foe anyone is going to want to see in the playoffs.

Here’s what the players had to say after a convincing win over Chino Hills Tuesday night. 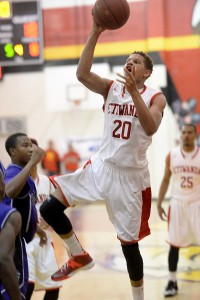