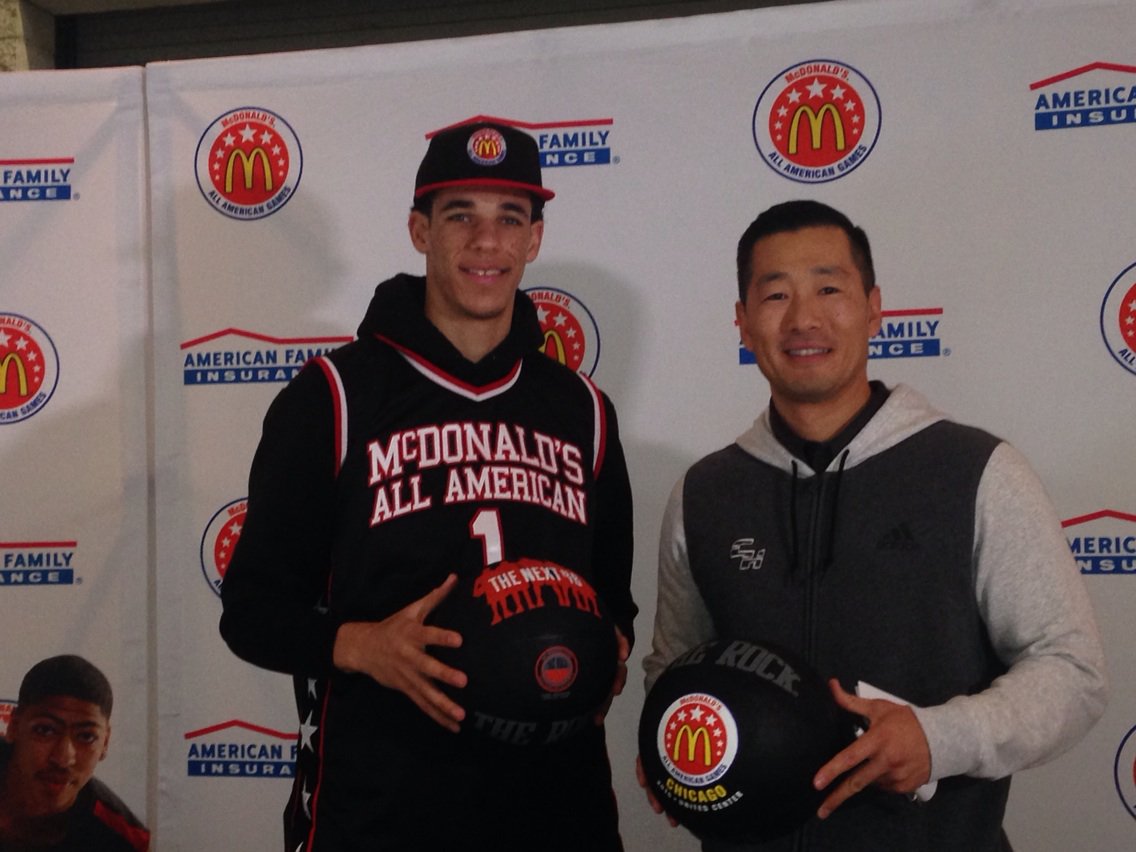 Ball, who has signed with UCLA, is the top point guard and No. 5 ranked prospect in the country according to ESPN. He has propelled the Huskies to a 25-0 record and a No. 1 national rankings from multiple sources.

He has already been selected to play in the prestigious McDonald’s All-American game.

Here is the lists of finalists:

He was flanked on stage by his younger brothers LiAngelo and LaMelo and Huskies head coach Steve Baik, as well as members of the All-American staff.

He was cheered by fellow students and administrators.

“It’s a game you dream about playing in and I’m honored to be selected,” he said.

Ball found out Sunday night while the team was on the East Coast participating in the HoopHall Classic in Springfield, Mass.

“It was great having my teammates there with me when I found out,” he said.

The game will be held March 30 at the United Center in Chicago and features the top 24 players from around the country.

Huskies coach Steve Baik feels fortunate to have had the opportunity to coach a player of Ball’s caliber.

“I feel like I won the Power Ball Lottery getting to coach a player like him for four years,” he told the crowd.

It has been quite the season for the Huskies (18-0) who remain the No. 1 ranked team in the country. They face Damien on Friday in what is expected to be their stiffest test in Baseline League play.

It is the first of what are sure to be many honors as Chino Hills senor point guard Lonzo Ball has been chosen to participate in the prestigious McDonald’s All-American game on March 30 at the United Center in Chicago.

Ball, who has signed with UCLA, has led the Huskies to a 16-0 record and No. 1 spot in the country in multiple national polls.

He follows in the footsteps of much-heralded junior brother Lonzo who did the same a year ago. But Lonzo’s decision to go there wasn’t a factor in LiAngelo’s decision.

Why is that? Well Lonzo has said publicly he hopes to be one-and-done at UCLA and then go on to the NBA. If that happens he’d be leaving before LiAngelo gets there.

“I really like that they play an up-tempo game and the school has a great legacy in basketball,” he said.

The school being close to home was also a factor.  The brothers have considerable family support and presence at games and it’s something they would miss.

LiAngelo has made two unofficial visits to UCLA and never really considered another school.

Last season LiAngelo averaged 20.1 points and 3.5 rebounds with a season high of 53 in one early season tournament game. He was a first-team All-Inland Valley selection, helping the Huskies to a spot in the Division I state championship game.

He wanted to get the decision out of the way and make it public to focus on the rest of his high school career.

The high school season may have ended but he hasn’t stopped training. In addition to travel ball (Big Ballers) he is doing considerable conditioning. 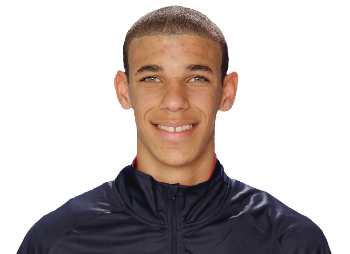 Yet another award for Chino Hills basketball standout Lonzo Ball.

A few days after earning national recognition, Ball has garnered praise from CalHi Sports which named the Division I player of the Year as well as the state’s overall top junior.

Ball, a 6-foot-6 guard, can play any position on the floor and boasted top notch numbers in several offensive categories, averaging 24.3 points, 11.3 rebounds, 9.1 assists, five steals and five blocked shots per game playing tough non-league competition and in arguably the toughest league in the state.

He was also CalHi Sports sophomore of the year last season.

Chino Hills basketball standout Lonzo Ball has another accolade to add to his growing resume.

The 6-foot-6 guard was one of the top five juniors in the country according to MaxPreps which named an All-American junior team that consisted of five players on first team, five on second and five on third.

Ball, who has committed to UCLA, nearly averaged a triple-double (24.3 points, 11.3 rebounds, 9.1 assists per game) while leading Huskies to Division I state title game.

Only one other Californian was singled out, that player being T.J. Leaf of Foothills Christian who was a second team selection. 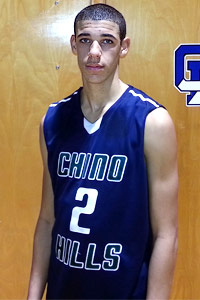 Junior guard Lonzo Ball of Chino Hills is one of six finalists for CalHi Sports state player of the year.

Ball, who has committed to UCLA, led the Huskies to the Division I state championship game. He is probably the most well-rounded player of the nominees.

Junior Lonzo Ball of Chino Hills and senior Jeremy Hemsley of Damien have led their respective teams to state tournament championship games. So not surprisingly they have earned special recognition.

They are in select company. Here is the list of those honored:

He runs. He jumps. He passes the ball with pinpoint precision. He scores at will. Defense? He plays that pretty well too.

Yes he probably leaps tall buildings in a single bound.

He’s Chino Hills junior guard Lonzo Ball. If you haven’t seen him play do yourself a favor and make a it a point to do so next season, his senior campaign.

He’s one of those players that come around every 10, maybe 20 years or so. He’s a lean 6-foot-6 but he plays much bigger than that.  His game is so well rounded it’s scarey.

Most think he’ll be one and done at UCLA, then go on to the NBA. That’s a lot of expectations for a guy not out of high school but he passes that eye test. Everywhere I go basketball fans and true experts are talking about him, even when his team isn’t necessarily playing.

He single-handedly propelled  Chino Hills to a 62-51 win over Corona Centennial in the Division 1 Southern California Regional at The Pyramid In Long Beach. His line for the night – 26 points, 15 rebounds, 8 steals, 5 assists, 3 blocked shots. That’s pretty insane when you think about it.

Despite how good he is, he is still pretty grounded and has a good temperment on the court.  He stole the ball right out of the hands of Centennial’s Ike Anigbpgu in the closing seconds of the third quarter with Chino Hills up 45-34. The Centennial player, perhaps a little embarrassed and frustrated had a few choice words and it looked like there might be minor skirmish. Ball just shook his head, grinned and walked away.

Here’s what Centennial coach Josh Giles had to say about him:

No one knew quite what to expect when the CIF announced it was having an “Open” Division in which all the premier teams would compete.

Etiwanda boys coach Dave Kleckner, whose team was among those chosen, was vocal about not liking it. His objection is that his was going to be one of the few public schools lumped in with a bunch of high-profile private schools perceived to have a clear advantage.

Others have said they’d love the challenge if they thought they had the talent to really compete.

Chino Hills boys coach Steve Baik was one of those who was on the fence about it. The Huskies have been an up and coming team in recent years. Well they have officially arrived.

Chino Hills (26-4) will face Mater Dei (28-1) at 6:30 p.m. on Saturday at the Honda Center in the championship game of that Open Division. Winning a CIF title in any Division is an accomplishment so this is the “king” of all accomplishments.

The Huskies weren’t the most talked about team in that Open division to start with but the Huskies are the team people ARE talking about now.

It’s a marvelously talented team with so many weapons. UCLA commit Lonzo Ball, just a sophomore, gets most of the attention. He has a freshman brother LiAngelo that might be even better before its all over. The two combined for a phenomenal play on Tuesday with LiAngelo getting a steal at the opponents end, then unleashing a full-court pass with one hand to his brother who connected for an easy layup. You won’t see a better play!

Seniors KC Cyrpian, Bishop Mency and Mark Williams have been stellar too. It was Cyprian leading the effort on Tuesday with 23 points (6 3-pointers) in a win over Redondo Union.

Big Man Nnamdi Okongwu is just a junior and has a lot of raw talent. He’ll work hard over the summer and should be a beast by next season.

The Huskies could have won Division 1-AA but what they’ll get out of this experience and tournament run will be far more rewarding.