Chaffey High School senior Mikey Dean didn’t just break record on the football field in the fall. This spring he is breaking them on the track too. 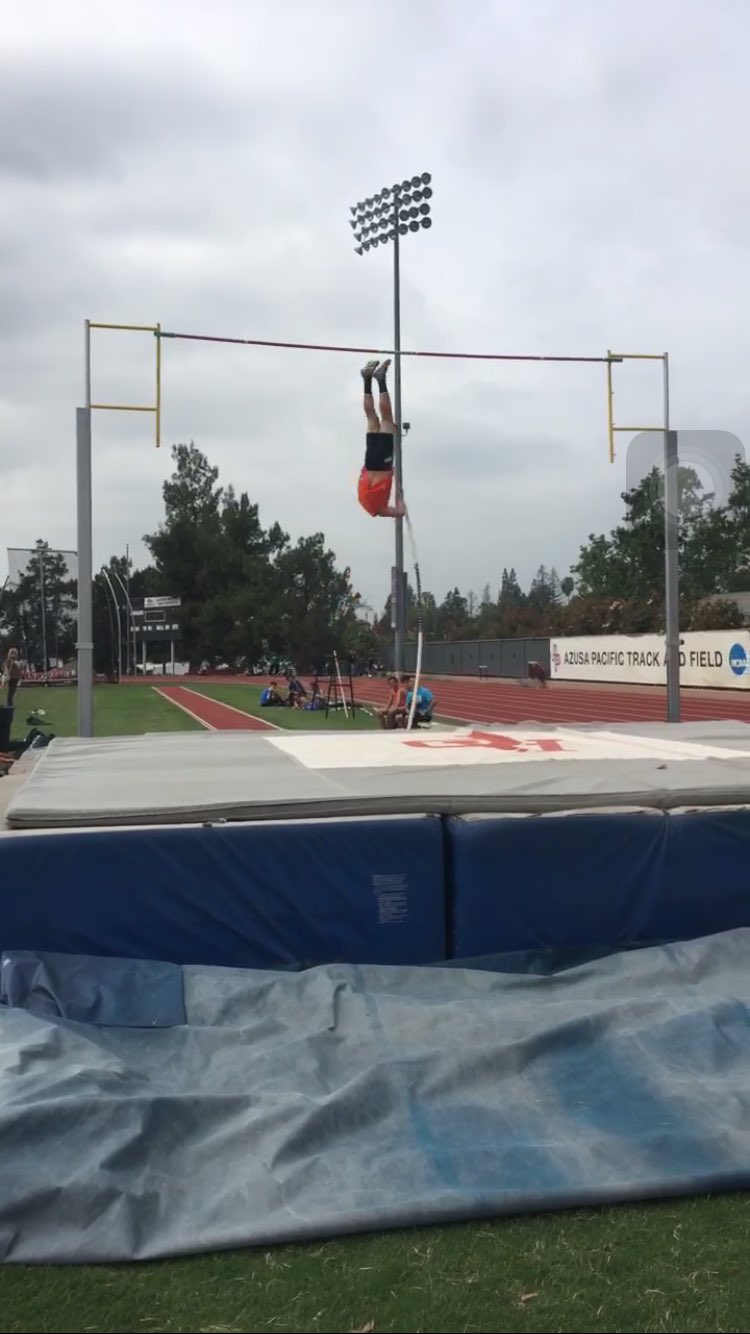 Dean broke the school record in the pole vault when he went 14 feet, five inches in a meet at Azusa Pacific on Saturday. That bettered the previous mark of 14-4 and one-quarter.

He has won the Mt. Baldy League title in that event all three years even though as a junior he was slowed by a broken pelvis.

The mark he reached on Saturday beat the previous best of 14-feet which came his sophomore year.

“I really wanted that record,” he said, “It has been my goal since I hit 14 as a sophomore, I just really didn’t get a chance to do much last year because of the injury.”

Dean, who has signed with Idaho State for football, also runs the sprints and is on the Tigers relay team.

Dorsey tallied 92 tackles and seven interceptions and owns the single season and career record for interceptions. He was the Mt. Baldy Defensive Player of the Year and a first-team All-Inland Valley selection.

Dean, who has committed to Idaho State, rushed for 2,555 yards and 37 touchdowns the past season including nine games of 100 or more yards and seven of more than 200 yards. He was the Daily Bulletin’s Inland Valley Offensive Player of the Year. 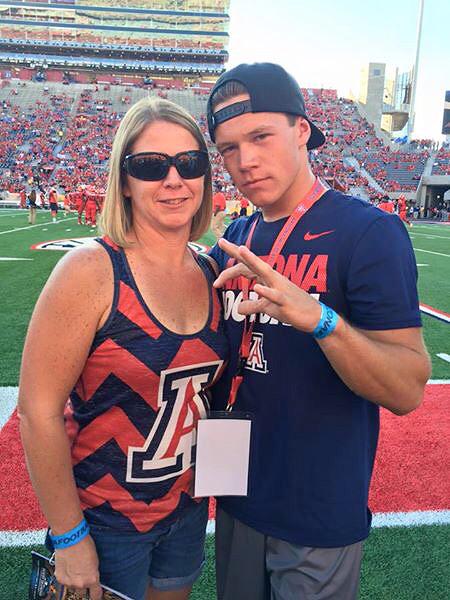 Chaffey’s Mikey Dean is putting up some downright ridiculous offensive numbers. The Tigers have played five games and he has 1,415 yards and 21 touchdowns to lead the entire state in both those departments.

He has rushed for more than 200 yards in every game and has three games of 320 or more yards. In Thursday’s win over Colton he ran for 332 yards and six touchdowns.

He should have college  scouts coming at him in droves and that isn’t quite the case.

The dilemma is his size. He’s 5–foot-7 (and a half) and 165 pounds. No matter how fast or tough you are that’s a tough sell for colleges who want size, speed and ALL the intangibles in one package.

He took an unofficial visit the past weekend to Arizona and was on hand for the Wildcats game against UCLA. He loved everything about the experience and has had ongoing dialogue with coaches from that school. Only time will tell if something further develops.

“I really like it,” he said. “The coaches all seemed to know who I was and that made me feel good.”

Army and Navy are interested with Hawaii also recently coming into the mix.

Dean would be a nice addition for any school, no matter what his size. Schools really ought to start looking at the total package rather than just stature. Dean is also a 4.0 student and a quality individual. He deserves a shot somewhere.

The Tigers are off this week in preparation for their Mt. Baldy League opener against Ontario,

Dean had a modest goal of reaching 2,000 yards this season but that seems like a forgone conclusion.

Another big week has earned Chaffey’s Mikey Dean another major accolade. He has been named Southern California Offensive Player of the Week by CalHi Sports.

Dean rushed for 336 yards and five touchdowns on just 13 carries in a 48-10 win over Bloomington.

Through four games this year for the 4-0 Tigers, this senior captain, who had a preseason goal of rushing for 2,000 yards this season, has rushed for 1,083 yards and 15 touchdowns on 100 carries.

He sat out the second half of last week’s game with the outcome in hand and has done the same in two other big wins earlier in the season.

The Northern California accolades went to running back Marcel Dancy of Tracy West. He had six touchdowns and 335 yards on 27 carries in a 57-42 win at Chavez of Stockton. 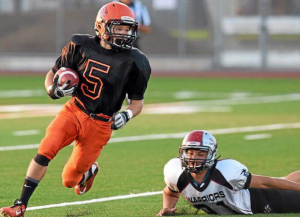 For something new this year we’re picking a male and female athlete of the week.

Coaches we need your help, particularly for sports we don’t cover on a daily basis. Send us your nominations by Sunday night each week. You can e-mail the information to Sports@Inlandnewspapers.com.

Winners will be announced on-line Tuesdays and in the newspaper on Wednesday.

There were no girls sports last week so we just have a boy this week.

Here is our first honoree:

VIDEO: Chaffey’s Michael Dean talks about preparing for his season.

Last year Chaffey High School’s Michael Dean rushed for 1,373 yards with more than 100 yards in 10 of 11 contests. He also played defensive back and was a big-play threat on special teams.

But the college offers didn’t exactly start flowing in. He admits it was a little discouraging. But chalk that up to his size rather than his ability. He stands only 5-foot-5. No matter what your speed, 5-5 isn’t going to land you many offers.

But some are starting to see past the size, or lack there of.

Azusa Pacific, which has made quite the splash in its infancy at the Division II level, has shown a lot of interest and he admits that option looks enticing should he actually get an offer.

“That definitely takes the pressure off,” he said of the two offers he has now. “I am starting to feel a lot better about things.”

Dean has worked hard during the off-season to prepare for the coming season, bulking up about 15 pounds and adding some muscle to his diminutive frame. He averaged 15 or so carries a year ago but with backfield mate James Oxier and quarterback James Leon both having departed, coach Chris Brown says he could get twice that.

He is used to playing full-time on defense too but if he needs a break, that’s where his break will come.

He had always competed in track in the spring but did little this year because he had a broken bone in his pelvis. That sidelined him for two months but he is back stronger than ever.

“I feel really good,” he said. “I’m really excited about this season and being able to do everything I can to help us win.”

The Chaffey High School football team settled for second place in the Mt. Baldy League last year behind eventual CIF Central Division champion Colony. The Tigers battled the Titans head to head but the Titans eventually wore them down and won the game.

Can Chaffey get over the hump this year? Veteran head coach Chris Brown says his team has the potential to do so.

“We have more depth than we have had before and that is really important against a quality team like Colony that likes to play up-tempo,” he said.

The Tigers, 8-3 last year, do have one of the top players in the area returning in senior running back Michael Dean, a first team All-Inland Valley and All-CIF selection who rushed for 1,373 yards and 16 touchdowns on 194 tries last year.

His partner in the backfield, James Oxier (912 yards), has graduated.

Brown says he has a lot of options there and will see how that plays out in the next couple of months.  There is the definite possibility that Dean, who also plays in the secondary on defense, could see more carries, bad news for upcoming foes.

“If we need to spell him it will be on defense,” Brown said. “He has really worked hard, put on some muscle and he’s a lot stronger.”

The biggest question mark will be the offensive line, an area with which Brown wasn’t happy last year. A bunch of those players are back so improvement is expected. Among the key players there will be senior tackle Alexander Kraskowsky.

Other key players on offense are sophomore quarterback Dequan Futrell, a transfer from Upland and freshman lineman Ryan Soliafu,

Another player that could factor on both sides of the ball is junior RB-DB Larry Hammett-Love, the second-fastest player on the team behind Dean.

“He’s going to be on the field somewhere,” Brown added.

The Tigers open the new season Aug. 28 at Lake Elsinore-Lakeside, a team they defeated 30-7 in last year’s season opener. The Tigers are also on the road the second week with the first home game being on Sept. 11 against Grand Terrace.