Ontario will boast one of the area’s top running backs when it takes the field this season – that’s senior Antoine Paul.

The biggest question is will coach John Kusleika have enough tools around the diminutive senior for that to translate into a better showing in the win column. Only time will tell.

Kusleika does have two starters returning from the offensive line – seniors Luis Guerra and Anthony Gil. He also has a quarterback returning in senior Luis Rivera. The top receiver is expected to be junior Ricardo Soto.

“We’re going to be a team that runs the ball,” the coach said. “But we also hope to be a little more proficient at throwing it when we need to because we have a quarterback returning.”

Kusleika will also be counting on his quarterback to play on defense, which isn’t always the ideal situation. The number of players in the program has dipped slightly so several key athletes will have to go both ways.

“You don’t like to do it but the bottom line is we’re a lot better team with him out there on defense too,” Kusleika said.

He singled out the inexperience of the secondary as a spot that concerns him most.

Making the playoffs is probably a stretch for the Jaguars, given that Atla Loma finished third last yea and did not make the postseason, Don Lugo and Colony are prohibitive favorites for the top two spots.

“Last year we scored more points than the previous year and we were a little more competitive so we’re making progress,” he said. “Hopefully this year we continue to improve. 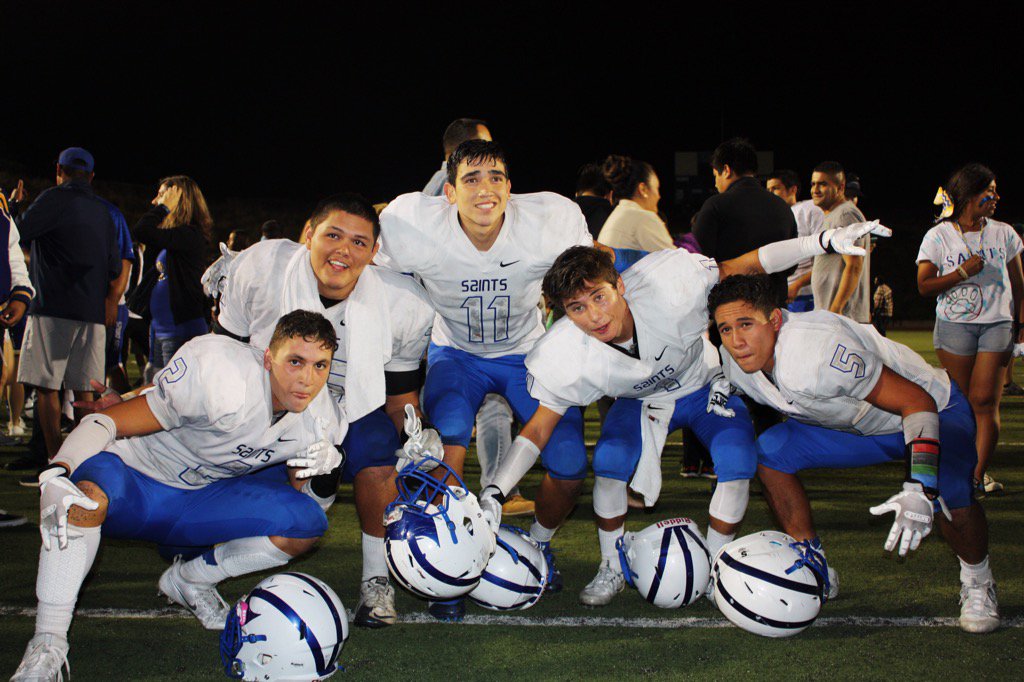 The game between Ontario (0-2) and host San Dimas (2-0) was originally scheduled for Friday but the move to 7 p.m. on Thursday was necessitated by not having enough officials to cover all the Friday night games.

The officials association reached out to some schools to see who would be interested in moving a game to Thursday and San Dimas was happy to oblige. Of course the Saints did so after checking with their opponent which didn’t have a problem with the move either.

Ontario just opened an on-campus stadium this year but has a permanent road team previously the Jaguars have always played a lot of Thursday games.

“It really didn’t make a difference to us,” Ontario coach John Kusleika said. “If that’s what they needed to do we were fine with it.”

Ontario is still looking for its first win of the season after being dealt a 56-28 loss by much-improved Nogales last week. The Jaguars turned the ball over four times which led to 21 Nogales points.

San Dimas is coming off a 55-14 shellacking of Maranatha and has outscored its first two opponents by a combined 97-28.

Dedication festivities for Ontario’s new football stadium were held in the spring. Now the Jaguars get to play in it!

Ontario High School will finally get to play a varsity game on its own campus this Friday night and it should be a real shot in the arm for a program that has struggled in recent years although last year’s .500 record was a step in the right direction.

The opponent will be Ontario Christian, a school only a block away. Both schools are looking forward to the contest.  Matt Hoekstra is starting his second year as coach at Ontario Christian while John Kusleika is in his third at Ontario.

The teams have scrimmaged the previous two years and this year Ontario spent much of the spring walking over to Ontario Christian to practice because work was being finished up on its stadium.

“Matt was very helpful to us when we needed a place to practice,” Kusleika said. “It should be a fun game. It can be a fun, friendly rivalry. They’re a small school but they’re always pretty good.”

Hoekstra is looking to rely on his running game with a solid trio of Zac Cupp, Blake Biby and Travis Struiksma the contributors. Other key players are senior wide receiver Ian Ulloa and junior quarterback Kevin Jack, who missed much of last season with an injury.

On defense Hoekstra singles out senior outside linebacker Clayton Dahl and senior defensive back Giovanni Debonis.

There has been a battle for the quarterback spot at Ontario with Aaron Delgado and Luis Rivera the candidates. Kusleika said he’ll likely use both and see what materializes. The Jaguars also have a solid running back in junior Antoine Paul, who saw a lot of playing time late last season.

Antoine Paul looks for running room in game last season against Montclair. He is one of the top returning players for the Jaguars.

The Ontario football program has made progress in the last two years under veteran coach John Kusleika. Well this will be his third year and he thinks it’s finally time to really turn the corner and at least contend for a playoff berth.

The Jaguars, 5-5 overall but just 1-4 in Mt. Baldy League play, head into the season with reason to be optimistic. Their showing in 2015 marked a three-game improvement in the win column over 2014 and they have 12 returning starters.

Then there is the opening of a new on-campus stadium so the varsity will be playing actual home games for the first time in school history.

“You set goals and you have to be realistic,” Kusleika said. “When you look at where we have been it’s tough to go out on a limb and say we want to challenge for a league title. It is more realistic to say if all goes well we have a shot at making the playoffs. We would be happy with that. Not necessarily satisfied –  but it would show we’re making progress.”

Among the returning starters on offense is junior Antoine Paul, one of the team’s three backs last year. He improved over the course of last season and was a pivotal factor bu the end of the season. With the departure of the top two ball carriers, he will shoulder more of the load this fall.

Others include guard Abel Estrada, tackle Osvaldo Diaz, running back Gianni Oquendo and running back Sheldon Osborne, all seniors.

“We’re farther ahead than we were at this time last year just because of the number of starters we have back,” Kusleika added. “Last year we only had a few.”

Kusleika’s concern is up the middle as he graduate a quarterback, a fullback and a center. The Jaguars won’t change what they do and that means someone will have a tall order in replacing Cameron Poe, who wasn’t a threat throwing the ball but was dangerous as  a ball carrier.

There is a battle brewing for that spot with the candidates being Luis Rivera and Aaron Delgado. Both are juniors.  Rivera was a linebacker last season while Delgado was Poe’s backup and also started for a freshman team that went 7-3 two years ago.

The Jaguars make their debut on Aug. 26 on that new home field against Ontario Christian.