Four days after the fact, the Rancho Cucamonga boys basketball team was declared a 62-61 winner over Villa Park. That was after the Cougars won the game, then thought they lost it in controversial fashion, only to have that outcome overturned on an appeal.

Yes, it was as messy as it sounds.

The game took place in the Ron May Classic at Long Beach Jordan on Saturday. Rancho led 62-61 with two seconds left and Villa Park in-bounding the ball under its own basket.

Rancho coach Bill Burke said there was a problem in the control panel of the clock and scoreboard and the buzzer would go off several seconds after the actual time on the clock had expired. It was something noticed by most coaches throughout the day-long event and he had mentioned it to the officials before his game started.

Well Villa Park in-bounded, took a shot which was off the mark. The ball caromed to the same player that took the first shot and he made his second chance. One official waved off the put-back immediately while the other made no call.

The teams even completed the post-game handshakes.

The Villa Park coach then pulled one of the officials aside. He then conferred with the other and decided to put two seconds back on the clock and replay the end of the game. This time they made the shot for what then appeared to be a 63-62 Villa Park win.

Burke was admittedly furious and informed game officials he would be protesting the outcome.

“I didn’t even know what you have to do in that situation,” Burke said. “I have never seen anything like that. It was like the USA-Russia in the 1972 Olympics. We’re going to replay the end of a game. Really?”

Burke said he filed a report to the CIF which requests the same from the other parties involved. He was not necessarily optimistic but felt he needed to at least look into the situation.

“You never win an appeal. I have talked to a lot of coaches and none of them can remember anyone winning one but I felt we were right and I was really hoping they would see it our way.”

The CIF did just that, which makes the Cougars 9-7 officially.

It’s been a bit of a tough go for Burke who has a very young and inexperienced squad. It also starts Baseline League play next week against Chino Hills and Damien.

“We really hit a tough stretch and this was a part of that,” he said. “Our kids were really devastated. It was nice to be able to give them the good news.” 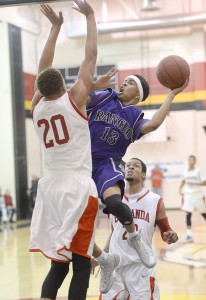 Rancho Cucamonga basketball standout Victor Joseph will play at Chaffey College next season, He plans to play one season because he is already an NCAA qualifier.

Joseph, a 6-foot-guard, helped the Cougars to a 25-5 record and runner-up showing in the Baseline League behind perennial power Etiwanda.

He averaged 21.5 points and 5.5 assists with a season high of 32 points against Los Osos. He earned All-CIF, All-Baseline League and Inland Valley honors.

Several Division I schools were interested including Colorado State and Florida A & M, both of which he visited. But Colorado State ended up not losing a couple of guards it thought were leaving and FAMU had a coaching change.

Washington State and Portland State were interested too but endned up getting guards that were slightly higher on their list.

Joseph has taken that in stride.

“At first I was disappointed because I think I’m a Division I guard,” he said. “But maybe God just has another plan for me right now. If I go out and have a great year I hope to have more options then.”

Joseph will get to play in a high profile program in a state where community college basketball is top-notch. The Panthers wee i the state title game two years ago and made the semifinal last season under coach Jeff Klein.

Rancho Cucamonga basketball standout Nick Culver has decided to stick close to home and will be playing at La Sierra University in Riverside.

The 6-foot guard helped the Cougars (25-5, 8-2) to a second-place finish in the Baseline League behind perennial title contender Etiwanda. Three of their five losses were to Etiwanda and were to Open Division playoff teams.

Culver should be able to contribute right away. La Sierra, which plays in the NAIA, went just 6-23 a  year ago.

Everyone knew that the Baseline League showdown between visiting Etiwanda and Rancho Cucamonga in boys basketball was going to be one for the ages. How can it not be with two teams both ranked in the top six in a very competitive division?

Rivals located about a Tiger Woods tee shot apart geographically. Each team led by a superstar player – that would be Jordan McLaughlin for Etiwanda and Victor Joseph for Rancho Cucamonga, both senior guards destined for great things in the future.

The game lived up to its billing with the Eagles prevailing 61-56.

It was a great atmosphere! Both crowds were into the game, even before the tip off, cheering the players as they took the floor for warm-up. Spectators on both sides were standing much of the game, especially at crunch time down the stretch.

Music blared during timeouts, fans sang and danced. Everyone was well-behaved, cheering their team and not jeering the other.

The only thing slightly unsportsmanlike – the Rancho Cucamonga faithful chanting “You’re a Trai-tor” each time Etiwanda junior center Jordan Naughton  went to the free-throw line. He transferred FROM Rancho. But that’s not that bad!

School administrators were ready for the crowd, with plenty of security on hand . . . just in case. Crowd flow in and out of the building was organized. Lessons were definitely learned from the debacle that was the post-game melee in football when Rancho played another local rival, Los Osos.

So hats off to crowds from both schools, school administrators and everyone else involved in making it a memorable night.

Do you want to get your fill of high school basketball? Well this is your week as the Inland Empire  Classic gets underway at several area high schools.

The will be 24 teams competing, beginning with pool play. each pool has three teams. Later in the week the winners of each pool advance to elimination play.

Here are the pools and schedule: