Last week: Keith and I were even, both missing Muir’s loss to West Covina.

This week: It’s Final Four time and as an added feature, we will pick the scores for all the games in divisions that feature area teams. I will also add the Southeast Division, which has been talked about in the area all season. I like a final of Monrovia and Paraclete (sorry Coach Z) in the Mid-Valley; Rio Hondo Prep and Mission Prep in the Northeast and La Serna and Santa Fe in the Southeast. 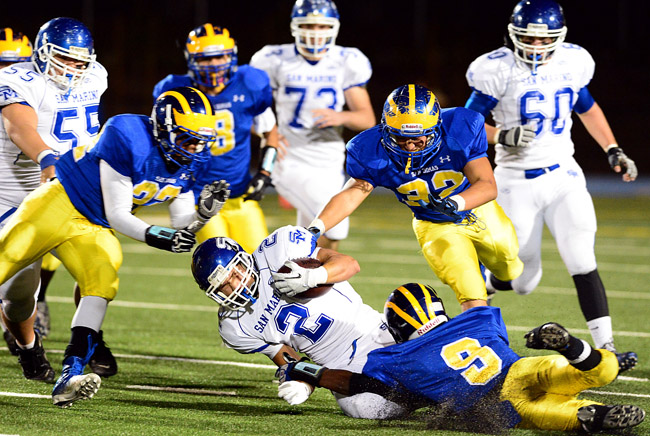 San Marino’s Ryan Wood (2) is taken down by San Dimas during the first half of Friday night’s game at San Dimas High School.
(SGVN/Staff Photo by Sarah Reingewirtz)

Monrovia and Rio Hondo Prep began the season as the area’s best hope for a CIF-Southern Section divisional title, and after Friday, the dynamic duo are the area’s only hope for a division championship, each surving in convincing fashion. Monrovia, getting 149 yards rushing and three touchdowns from Ge Vontray Ainsworth, rolled to any easy win over South El Monte, 43-6. Rio Hondo Prep, meanwhile, was equally impressive on the road at Desert in Lancaster, cruising to a 47-0 victory. Muir, lost a tough one, 21-19 to two-time defending champ West Covina in the Southeast; San Marino gave up the lead late and lost to San Dimas, 31-28, while Flintridge Prep proved to be no match for Northeast top seed Mission Prep, losing 49-14. And now there were two, with Mid-Valley No. 2 seed Monrovia vs. No. 3 Sierra Canyon at Granada Hills High, with Rio back on the road at St. Monica.

Friday’s Results
MID-VALLEY DIVISION
Monrovia 43, South El Monte 6
MONROVIA – There were those who believed South El Monte High School had a shot to upset two-time defending Mid-Valley Division champion Monrovia on Friday night.
It didn’t take long for the Wildcats to squash those hopes.
Ge Vontray Ainsworth rushed for 149 yards and three touchdowns and host Monrovia held the Eagles to minus-49 yards rushing and coasted to a 43-6 victory in a CIF-Southern Section second-round game.
Monrovia, also getting 129 yards passing and a touchdown from quarterback Blake Heyworth and touchdown runs from George Frazier V and Darione Jones, improved to 10-2. The Wildcats will face Sierra Canyon, a 28-20 winner over Arroyo, next Friday at Granada Hills High.
South El Monte, which defeated El Monte to earn a piece of the Mission Valley League crown two weeks ago before defeating Covina last week in its playoff opener, finished 7-5.
The Wildcats scored on their first five possessions to put it away by halftime and took a 29-0 advantage into the break.
Monrovia coach Ryan Maddox: “We played a well-rounded football game tonight. We were firing on all cylinders. We pride ourselves on finishing, and I think we did that tonight. Ge Vontray and Darione Jones played a great ball game, our offensive line did the job up front and our defense did an incredible job. It was an excellent game all the way around.”
San Dimas 31, San Marino 28
SAN DIMAS – Hollywood endings usually are reserved for Denzel Washington, not Denzel Mitchell.
But not even Hollywood could have scripted a better ending on Friday night for Mitchell, a running back/defensive back on the San Dimas High School football team.
Mitchell made the game-turning interception, then moments later scored the game-winning touchdown as San Dimas handed visiting San Marino a 31-28 defeat in the second round of the CIF-Southern Section Mid-Valley Division playoffs.
The win sent San Dimas (11-1) to the semifinals for the fourth consecutive season. The Saints will play at top-seeded Paraclete next Friday. San Marino finished 10-2.
The Titans twice had 11-point leads in the second half, but costly interceptions and a Saints offense that kept grinding proved to be the difference. San Marino went ahead 28-17 with 3:37 left in the third quarter on Ryan Wood’s 32-yard touchdown run.
San Dimas answered right back with a 46-yard touchdown run by Andrew Espinoza to make it 28-24. Espinoza ran for 187 yards on just five carries.
Denzel Mitchell: “I kept telling my team that we’ve got to make plays and it was just me who made the plays. I was thinking somebody else (would get the ball), but when my name gets called, I’ve got to do what I’ve got to do for my team.”
SOUTHEAST DIVISION
West Covina 21, Muir 19
Defending CIF-Southern Section Southeast Division champion West Covina isn’t done yet.
After needing to win its final game in the Hacienda League to make the playoffs, the Bulldogs advanced to the semifinals with a 21-19 victory over third-seeded Muir that was full of clutch calls from Bulldogs coach Mike Maggiore.
West Covina (8-4) will face second-seeded La Serna at California High in next week’s semifinals. La Serna (11-1) is the same team the Bulldogs defeated 84-21 last year
or the title while setting a CIF-SS record for points in a championship game.
With Bulldogs quarterback Jon Najera on crutches with an injured ankle, junior Henry Tarin platooned with Antonio Hull at quarterback.
Tarin wasn’t asked to do much, but clinging to a one-point lead, he delivered a 28-yard pass to Sidney Jones at the 10 that eventually set up Aaron Salgado’s 4-yard scoring run to go up 21-13 with 6:53 left.
However, Muir’s Andreece Brown returned the ensuing kickoff 95 yards to the 5 and later scored on a 3-yard run, but the Mustangs (8-4) came up short on the two-point conversion try to trail, 21-19.
West Covina, using a key first down on fourth and 3, then ate up most of the clock before holding off Muir to advance.
NORTHEAST DIVISION
Rio Hondo prep 47, Desert 0
The Rio Hondo Prep offense had an off game Friday night.
But the Kares’ defense was just fine, holding host Desert scoreless for a 47-0 victory in a CIF-SS second round game in Lancaster.
The Kares (10-1) will travel to St. Monica Catholic of Santa Monica in next week’s semifinals. The Mariners scored a 19-16 victory over Boron, preventing another Rio Hondo Prep-Boron semifinal game.
Nate Tayco rushed for two scores and Colby Rivera, who did not practice all week because of a leg infection, threw scoring passes to Jake Holguin and Kevin Horton.
Rio Hondo Prep coach Ken Drain: “We did not play very well. We had more turnovers than any game all year.”
Mission Prep 49, Flintridge Prep 14
Patrick Laird rushed for 174 yards and two touchdowns, and caught a 27-yard scoring pass to lead the Royals.Stefan Smith had 118 yards for Flintridge Prep.
Flintridge Prep coach Antonio Harrison: We’ve done something no team at Flintridge Prep has done in almost 10 years. That’s to make it out of the playoffs and out of the first round. I do not want the kids to be upset at all. I told them the tradition is coming back.”

It’s not every year you see two 10-1 teams square off in the second round of the CIF-Southern Section football playoffs.
But that’s exactly the case on Friday night when San Marino (10-1) visits San Dimas (10-1) in a game that surely will have the attention of the rest of the Mid-Valley Division.
“They’ve beaten everyone in front of them except Monrovia and we’ve beaten everyone in front of us except Monrovia, so it’s a neat little game,” San Dimas coach Bill Zernickow said. “We’re very similar, our schools, in terms of makeup.
“It feels a lot like we’re playing ourselves.”
San Dimas took its loss to Monrovia back on Sept. 14 by a score of 35-23.
San Marino’s setback came on
Oct. 26 and the score was 21-16. But reading too much into how each team did against the Wildcats would be foolish, according to Zernickow.
“They are very, very good,” he said. “Both teams. We’re going to have to play our game. The game is going to go really fast, probably two hours, because we’re both going to run the ball.”
END_OF_DOCUMENT_TOKEN_TO_BE_REPLACED