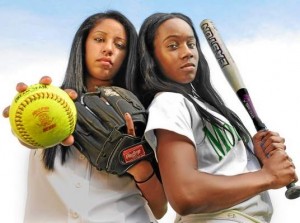 Monrovia’s Adrienne Guerra and Elise McCarthy (photo by Walt Mancini)
A look at the softball Top 10:

1. Monrovia
The Wildcats have made long runs in the Rio Hondo League and CIF-Southern Section playoffs the last couple of years, but have come up empty in winning both.
2. La Salle
The Lancers return eight starters and have added a freshman that coach Rich Diaz expects to make an immediate impact.
3. Maranatha
The Minutemen have already lost two players to season-ending injuries, but they still have reasons to be confident, as nine players return.
4. La Canada
The Spartans finished only one win away from the Rio Hondo League title and are legitimate contenders again.
5. Temple City
The Rams have strength up the middle.
6. Rio Hondo Prep
Prep League Player of the Year Alexis Parker returns, along with five other seniors.
7. Pasadena Poly
The Panthers may not start off fast, but the they could finish by challenging for the Prep League title.
8. Alverno
The Jaguars will have to wait on the five just-returned soccer players to get back into softball shape before they will make any headway.
9. South Pasadena
The Tigers are rebuilding, but they return starting pitcher Cassie Baca and have some talented first-year players.
10. Duarte
Falcons coach Paul Viteri knows it will likely be a tough season.

The story is at http://www.pasadenastarnews.com/sports/20140303/prep-softball-preview-guerra-mccarthy-will-lead-monrovia-softball-team