The Temple City High girls water polo is on track to do something that has not been done in five years: win a Rio Hondo League title.

The Rams begin the second round of league play undefeated for second-year coach Oscar Dorado.

“It’s been night and day,” Dorado said between last season and this season. “It’s a completely different program. During training we did a lot of adjustments. The girls are very motivated and having fun.”

The Rams (10-4, 4-0) play host to South Pasadena on Thursday. Temple City scored a 13-6 victory in the first game against South Pasadena. They have slowly been creeping up the CIF-Southern Section Division 5 poll; they are ranked fifth. 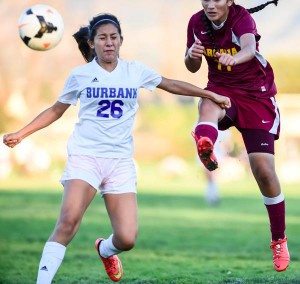 The goals keep piling up: Six in one game, seven in two games, 13 in another and then four more on Tuesday afternoon.
But as many goals as the Arcadia High School girls soccer team has scored this season, it comes down to what the Apaches’ defense has accomplished this undefeated season.
Tuesday was no exception at Burbank’s Luther Burbank Middle School. The Apaches stopped host Burbank attack after attack, even saving a penalty kick, en route to a 4-0 Pacific League victory and their ninth shutout of the season.