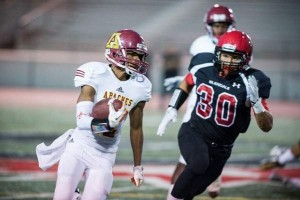 GLENDALE The Arcadia High School football team found it had to go backward to go forward.
The Apaches were beset by penalties in their Pacific League opener on Thursday night at Glendale. Eighteen times to be exact.
But all of the calls, which resulted in 151 negative yards, never seemed to matter as the Apaches (2-2) managed to push forward in a 42-0 victory. The final quarter was played with a running clock.