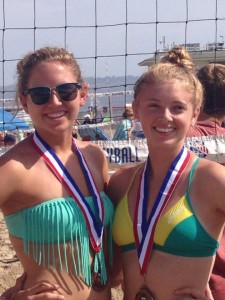 Sedona Hansen of Serrano High School and Janell Walley of Yucaipa teamed together and came away with a bronze medal at the AAU Junior Olympics beach volleyball in the 16-under division event held in Hermosa Beach.

The division included 70 teams from throughout the country.
Hansen qualified by winning an AAU Tournament earlier in the season with regular partner Kylie Miller of Rancho Cucamonga. AAU rules allow a qualified player to pick another partner if the need arises.

Walley was a logical choice since she had played with Hansen last summer with an indoor team that had also finished third nationally.
The two also played a beach tournament together a year ago.

Hansen and Walley ended up seeded 11th but advanced through bracket play before losing in the semifinal.
One of the girls’ bigger pool play wins came against the team that eventually finished first.