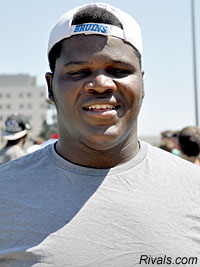 Clark is 6-foot-2, and Pierce didn’t know exactly how much he weighs (but is at least 320 pounds), and Rivals lists him at 336 pounds. He had 60 total tackles, 15 tackles for loss, four sacks and forced three fumbles last season. Pierce thinks that people are wary of Clark because with all the fast-paced spread offenses, they think a player such as Clark won’t be able to keep up, but they’d be wrong. I am not positive he is good enough to play at UCLA, but he certainly should be getting a lot more offers than he’s been getting.