As the prep football season fast approaches, I thought it might be good to take a look at some of the players sure to do great things the coming season. One of those is senior wide receiver Geordon Porter of Etiwanda.

Porter currently has 15 offers and has narrowed his list to seven schools. He has planned visits to Utah (Sept. 2), Notre Dame (Sept. 9) and Arizona State (Sept. 16). Four other schools – Alabama, Cal, Colorado and UCLA – are still in play.

He had quite the smorgasbord to chose from. Others offering included Purdue, UNLV, Washington State, Hawaii, Georgia, San Jose State, Colorado State, UNLV and Duke.

The 6-foot-2, 172-pounder had a decent season as a junior with 33 catches for 512 yards and five touchdowns. He came up big in a 45-42 win the last game of the regular season against Damien which got his team into the playoffs. 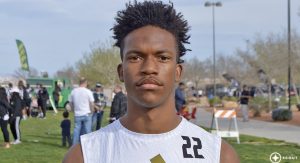 Etiwanda coach Kevin Davis said interest in his speedster picked up in the spring after he ran 10.6 in the 100 during a spring track meet. A couple of offers quickly turned into more than a dozen.

“He was on the radar before that,” Davis said “But when schools saw that the interest really did pick up in a big way. He is really ready to have a huge season,.”

Porter’s potential is not surprising given his genes. Father George was a track standout at USC. Older brother Grant, who graduated from Upland in 2016, red-shirted last year at Washington State and is looking to be a factor for the Cougars this year at defensive back.

Porter says he learned a lot from watching his brother go through the recruiting process.

“It can be a lot of fun but at times it is stressful too,” he said. “You have to find the school that is the right fit and there are lot of things to consider – what offense it runs, how soon you thing you can play, what school fits you best academically.”

Davis said while Porter’s biggest contributions will come on offense, he night also be used on defense as well as on special teams.

“He makes things happen so we definitely have to get the ball in his hands,” Davis said.

Porter and the Eagles make their debut on Aug. 25 against Summit in their annual rivalry game at Miller high School.