Residents of Sierra Madre like to think of their town as the closest thing to heaven on earth.

But hell came calling over the past several days. The call came in the form of a wildfire that threatened hundreds of homes wedged into the side of the San Gabriel Mountains.

The fire, a 500-acre hillside blaze that lit up the night sky, forced the evacuation of more than 1000 residents and placed the tiny community of 11,000 right in the crosshairs of national media attention.

Fortunately, as of late Monday afternoon, no one was killed or injured, no homes were destroyed, and life seemed about to return to normal.

On any other spring day, there’s probably nothing quite like a walk through Sierra Madre.
Even with smoke and ash in the air, the scent of night blooming Jasmine, eucalyptus, wild roses and rosemary lingers everywhere.

At the top of Auburn Avenue less than 100 yards from a smouldering hot spot, I met a man named Richter who said he’s lived in Sierra Madre all his life and in that neighborhood since 1970. He said he didn’t fear the fire.

” I wouldn’t live up here if I didn’t like it,” he said. “If you live down by the freeways, you can’t hear yourself talk,” he said. “But up here, it’s as quiet a church mouse — just like heaven.”

City officials have their own take on life in Sierra Madre.

“This is one of the last small towns in America,” Kurt Zimmerman, Sierra Madre’s mayor told a media hoard gathered in Sierra Vista Park, just down the road a piece from the Richter place.

“There’s no traffic lights,” he said, stifling a tear in his eye and a catch in his throat. “This is a place where neighbor knows neighbor.”

Although fire and police officials said they have not determined a cause for the blaze, Zimmerman pointed to a likely human origin.

“Someone, at approximately 3 p.m. Saturday started a fire in the hillside over our city,” Zimmerman told the cameras, microphones and pencils. “This is a crisis situation.”

Zimmerman went on to praise firefighters who, early Monday morning, prevented the blaze from reaching into one of Sierra Madre’s neighborhoods.

“Early this morning,” he began. “A couple of feet from our homes in the canyon, a perimeter was established when bodies and engines; steel, water and human flesh and blood stopped the fire dead in its tracks. We are making progress.”

Almost as soon as Zimmerman completed his dramatic statement, a city spokeswoman said the mayor misspoke.

“We do not know the cause of the fire,” Elisa Weaver said.

She left it at that.

I could hear Zimmerman say, “I didn’t say ‘intentional.’ I was told it was not a bolt of lightening.”

Nonetheless, Diaz came to the podium and reiterated the official position: The cause of the blaze remains unknown.

I wandered away from the park and the press and found myself standing alone in the middle of a graveyard. I spent time looking at old tombstones, thinking of how peaceful the place must be when fire choppers aren’t hovering above.

These came to me from fellow reporter Janette Williams. She received them with this note:

My name is Amber Fountain, a sophomore at La Salle High School, and theses are some pictures of the Chantry fires i took from my house in Sierra Madre. 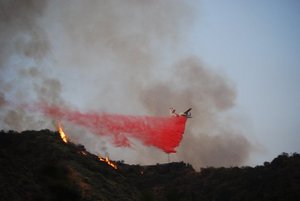 What is the name of the fire? I thought there was some official settlement on Sierra Madre. But some are still calling it the Santa Anita fire, while still others refer to it as the Chantry Flats fire.

Here’s an interoffice memo from ME Steve Hunt, clarifying the naming:

I guess several media outlets have called it by different names, but Hector reports the Forest Service has officially dubbed the fire above Sierra Madre the Santa Anita Fire.

As for more photos. Here’s a couple more. Its fascinating to see how many citizens carry digital devices to record the event for posterity. I saw digital recorders, camcorders, laptops and cameras. Amazing.

Sherry Wheelock and her twins, Michael and Christopher, 13, walk south on Baldwin Avenue protecting themselves from the smoke hanging in the air.

Looks like we’ll be unable to post until about 5 p.m. If there’s no posts here by 7 p.m. check sgvcrime.blogspot.com for updates.

Spent the morning in Sierra Madre, listening to officials, talking to residents, visiting the fire line and taking in some sights and sounds.

While I was gone, an email arrived with a great map link. Here the link to an inciweb fire progression site.(thanks to the other Mala).

Here’s a couple of photos from a batch I took this morning.

This is on Baldwin Avenue, just south of Carter. The flames shot up through oak trees on a nearby ridge, while copters hovered overhead and residents and media looked on.

This is from Frank, who is at the scene of the fires:

Also, residents east of Camillo Street, north of Grandview Avenue, may be allowed to return to their homes as early as 2 p.m. today.

The view from Mount Wilson (thanks 20/20 hindsight)

Another personal take from a guy named Simon.

The Foothill Cities — putting together just about everything else there is to know about the fire here.

Caption: Jeff Hurd, far right, foreman of the Los Angeles County Camp 14 fire
crew accesses the Chantry Flats Fire before cutting line with his crew
above the Sierra Madre Dam to hold back the fire from homes in Sierra
Madre Sunday morning, April 27, 2008. Residents in the area were
evacuated as 400 acres continue to burn. (SGVN/Staff Photo by Sarah
Reingewirtz/SXCITY)

Our blogs are scheduled to move to a new server sometime this afternoon. During the move there may be a delay in getting posts up online. I should be notified when the move occurs, and I’ll pass that information on to you all. As soon as the move takes place, I’ll post at the Crime Scene mirror on Blogger. http://sgvcrime.blogspot.com

As soon as we reactivate, I’ll move any posts back here.

Thanks for reading, and thanks for your patience.

First the links:
Cell phone video from Saturday night. Hahainlala.
Links roundup. Altadenablog.
Personal reflections. Glass 1/2 full.
The 7 a.m. UPDATE: Evacuations scheduled to be lifted by noon this morning. The fire consumed 470 acres and is approximately 27 percent contained (down from 30 percent last night)
Morning Paper: Brian Day Caroline An and Melissa Pamer put together the story for the Star-News. An excerpt here:

SIERRA MADRE – A wildfire that by Sunday had scorched more than 400 acres and forced the evacuation of 1,000 people could take four to seven days to contain, officials said.

The Santa Anita Fire – which has also been referred to as the Santa Anita Canyon Fire and Chantry Flat Fire – was still raging in the foothills above Sierra Madre and Arcadia on Sunday night, and was only about 30 percent contained.

Officials anticipate the fire could grow before it begins to shrink.

“But because of the steep grade, it will probably grow in acreage before we get it contained.”

All private and public Sierra Madre schools will be closed today, city officials said, and people with respiratory conditions are advised to stay indoors due to the smoke.

The blaze was first reported as a five-acre fire about 3 p.m. Saturday off of Santa Anita Canyon Road near the Chantry Flat area, Peebler said.

Hours later, the fire had burned 100 acres, then quadrupled in size overnight, prompting the evacuations of about 550 houses in the northern area of Sierra Madre, he said.

Resources from the throughout the region were called to assist in the firefight Sunday, including about 400 firefighters and another 100 support personnel, officials said.

A family at the edge of the flames. Flannigan Family Blog.

“This is pretty serious,” Weaver said. “Some of these areas have not burned in over 40 years.”

Aircraft were also helping fire officials assess the movement of the blaze, which was being pushed northwest into Angeles National Forest, Batallion Chief Tim Davis of the Forest Service said.

“It’s very steep, inaccessible terrain, and it’s very heavy brush,” Davis said at a news conference. “Very difficult and arduous labor for these crews. You can’t get bulldozers into the majority of where these fingers of fire run.”

The blaze stranded 50 guests from a wedding party at the Chantry Flats ranger’s station on Saturday until they were airlifted out Sunday afternoon, Weaver said. It took five helicopter trips from the ranger’s station to the parking area where the wedding party’s cars were. The party then was escorted out by road.

The couple, Ken and Julie Grady, noticed the smoke not long after they had exchanged vows.

I just finished talking to Julie Sokolowski, the bride whose wedding party was transported out of Sturdevant Camp in the Chantry Flats area earlier today via helicopter.

Sokolowski told me her stepfather, Chris Kasten, has been managing the camp – four miles from the Chantry Flats Ranger Station – for 17 years and is still up there with his wife. They opted to stick the fire through.

Sokolowski and her husband, Ken Grady, tied the knot on Saturday at 3 p.m., about the same time the Santa Anita Fire started. No one in the wedding party knew about the blaze until Saturday evening.

By noon today, the entire wedding party – 45 people and four pets – were evacuated from the area.

“We didn’t think there was any threat to us,” she said. “We went on like normal and then this morning, we were all having breakfast and they told us search and rescue was on their way.”