COVINA — Covina police reported late Saturday that an airplane ticket found with the body of Covina massacre suspect Bruce Pardo was not to Canada, mas initially reported by the coroner’s office, but rather was a ticket for a Canadian airline to Moline, Ilinois, on the Iowa border with a stop in St. Paul.

From there, Pardo had made plans to be picked up by from the airport by a friend in Iowa with whom he intended to stay, Covina police Lt. Pat Buchanan said.

His plans obviously derailed, however, as he was found at his brothers home dead from an apparently self-inflicted gunshot wound hours after the attack.

Pardo had suffered severe burns in the attack, police said, which may have prevented him from fleeing.

The photo of Alicia and Jose Ortega comes from the Mexican newspaper, “El Siglo de Torreon” which profiled the couple on their 50th wedding anniversary.

The couple and seven other members of their family are missing and presumed dead following a Christmas Eve massacre at their home on Knollcrest Drive in Covina.

Here’s some of El Siglo’s report (Translation by Google):

The family was killed by a man dressed as Santa Claus in Los Angeles have roots in Torreon, as owners of the house where the massacre occurred was a marriage from the city, in-laws of the murderer, Bruce Jeffrey Pardo.

A Toyota Rav4, apparently rented by Bruce Pardo in the days before he carried out the massacre of nine people celebrating Christmas at a Knollcrest Drive home, has been recovered, officials said.

A bomb squad investigation is now underway. THe car may be boobytrapped or contain explosives.

Here’s the most recent update:

A sheriff’s bomb squad is investigating a vehicle in Glendale they believe was rented by Bruce Jeffrey Pardo, the gunman in the Christmas Eve massacre who later killed himself.

A gray 1999 Toyota RAV4 was rented by Pardo from an agency in Pasadena Dec. 19 and should have been returned Friday, said Lt. Pat Buchanan of the Covina Police Department.

Police said Saturday they are seeking a second car that may be associated with Bruce Pardo, a gunman who dressed as Santa Claus who methodically killed nine people inside a Covina house on Christmas Eve.

Anyone who sees the SUV, which has a license plate number of 5RYD562, is advised not to approach it, the lieutenant said.

“We believe it may be booby trapped or contain explosives,” he said.

A Dodge Caliber rented by the suspect and abandoned in Sylmar was rigged to explode when examined by investigators.

From the Los Angeles Times:

Nancy Windsor broke into violent sobs and tried to speak through them as she described her struggle to cope with her son Bruce Jeffrey Pardo’s Christmas Eve massacre, in which he killed his ex-wife and eight members of her close-knit family.

“I have to be honest with you, I’m having trouble holding myself together,” Windsor aid today in a brief telephone interview with The Times from the hotel where she is staying 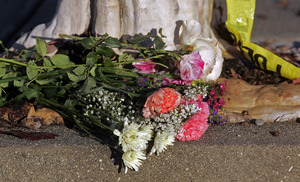 A small bouquet of flowers was left a few homes away from the crime scene at 1129 Knollcrest Drive where the Christmas Eve murders took place in Covina, photographed on Friday, December 26, 2008. (Photo by Raul Roa)

Dressed as Santa, Bruce Pardo, 45, of Montrose, opened fire with four semi-automatic handguns on a party at the home of his ex-wife’s family. He then sprayed the home with a flamethrower, which burned the home to the ground. 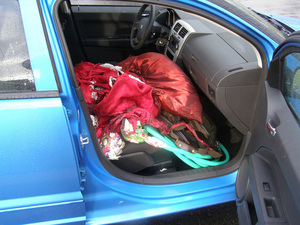 The Santa Claus suit worn by suspect Bruce Pardo is pictured on the
front seat of his 2008 Dodge Caliber SUV which was driven to the
Knollcrest Drive house and later found in Simi Valley.   The suit was
apparantly booby-trapped and after being moved ignited an incendiary
device which fully engulfed the vehicle in flames.  (Photo courtesy
Covina Police rcd Dec. 26, 2008) 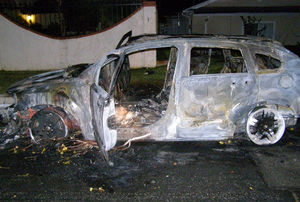 The photo at left shows Pardo’s car after the suit ignited and burned.

This from the City News Service:

LOS ANGELES — The Los Angeles County Sheriff’s Department announced
today the recovery of a stolen 850-pound emerald — reportedly worth $370 million —
but released few details about the case.
The so-called “Bahia Emerald” was recovered last Friday in Las Vegas, according to a
sheriff’s department news release.
The gem was stolen from a secured vault in South El Monte in September
and later warehoused in the Nevada gambling town, said Lt. Thomas Grubb of the
sheriff’s Major Crimes Bureau.
The unidentified individuals who were in possession of the emerald in Las Vegas
initially agreed to release it once the lawful owner was identified, but deputies
returned to the prearranged location armed with a court order, according to
Grubb.
Grubb said he was precluded from releasing information regarding the owner of the
stone because of pending litigation. He added it was difficult to determine details
about the rightful owner because so many people were involved with the stone.
“A judge is going to have to rule on who the rightful owner is,” Grubb said. “There
is some civil litigation involved, but there will also be criminal proceedings.”
No arrests were made, but the investigation continues, he said.
The stone, which reportedly contains the largest spires of emeralds in the world, is
being stored by the sheriff’s department pending release to the lawful owner. The
emerald is believed to be the second largest stone of its kind in the world,
according to the sheriff’s department. 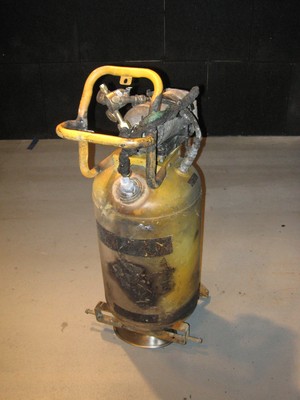 The photographs attached to this e-mail are of the device Suspect
Pardo brought with him to the Knollcrest house. What you see depicted in the photogrpahs is the tank from a compressor where the actual compressor mechanism has been removed. Added on to the compressor tank is another
smaller tank. We believe the smaller tank held the high octane racing
fuel and the larger of the two tanks held compressed air. We believe
Suspect Pardo added plumbing to where he could attach a hose line
with a sprayer on the end. The hose line was consumed in the fire and we have yet to find the sprayer end. In several of the photogrpahs, you can
see the Christmas wrapping paper stuck to the upper tank.

This from Ruby Gonzales:

Sylvia Pardo, 43, had three children. They survived the massacre.

She didn’t have a criminal record. Records show she has lived in Oklahoma and Texas.

She worked as a sales and marketing assistant at John Bodger and Sons Inc. in South El Monte. It operates under the business name Bodger Seeds, Ltd.

News of the killing surprised her employer.

Bodger said Sylvia Pardo had been with them six or seven years.

“She was an excellent employee. Very kind. Always considerate of others,” Bodger said.

The couple had a court hearing Dec. 18.