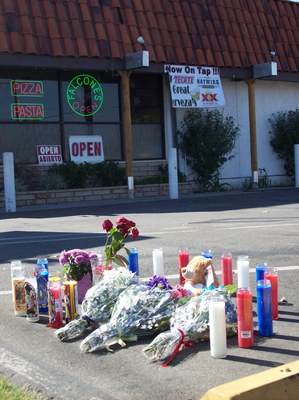 PICO RIVERA — Detectives tried to make sense Sunday of a pizza parlor shooting that left three men dead and seven people wounded during a charity fund-raiser.
The names of those killed were not released Sunday evening pending notification of family members, coroner’s officials said. Two of the dead men were cousins.
The attack occurred about 6:45 p.m. on Saturday in front of Falcone’s Pizza, at 9247 Slauson Ave.
Officials believe the Old School Riders motorcycle club was holding a charity event in the eatery’s parking lot when a male Hispanic adult opened fire.
“(He was) firing wildly into the crowd,” said Detective Joe Sheehy of the Los Angeles County Sheriff’s Homicide Bureau, which is investigating the shooting.
The gunman was last seen getting into the passenger side of a dark-colored vehicle with a waiting driver, Sheehy said. The car sped away west on Slauson Avenue.
No further description of the gunman was available Sunday.
The three deceased victims were pronounced dead at the scene. Additionally, four men and three women were hospitalized, but all were expected to survive their injuries, Sheehy said.
About a dozen children were present when the shooting occurred, Sheehy said. “It was very lucky no kids were hit.”
It was unclear Sunday what motivated the attack, which appeared to be unprovoked, Los Angeles County sheriff’s Deputy Byron Ward said in a written statement.
Sheehy declined to say if additional gunmen may have been involved.
“That’s something we’re going to have to hold back for right now,” he said.
Officials said detectives were sifting through footage on surveillance tapes from nearby businesses. About 40 witnesses inside the pizza parlor had been interviewed Saturday night.
Sheehy said the Old School Riders has no gang affiliation, and Falcone’s Pizza is not a gang hangout.
While some witnesses said the shooting may have involved members of the Mongols motorcycle gang, Sheehy said he did not believe anyone attending the party Saturday was a Mongol.
“If this was (an attack) against Mongols, it was definitely a case of mistaken identity,” Sheehy said.
“Friends, family members, that’s who was attending this,” he added. “That’s about all it is.”
Falcone’s Pizza was open for business Sunday, but an on-duty manager declined to comment. A memorial of flowers and candles stood in the parking lot.
A stray bullet Saturday had pierced the window in front of the playground area of a nearby McDonald’s restaurant, but no one was injured. By Sunday, the window had been replaced and the business was also open.
Rey Castillo, 52, of Highland Park said his daughter’s boyfriend, Garret Dandini, and Dandini’s cousin, Tony Dandini, were among the dead.
He said the two were members of the Old School Riders club — which he described as a group of motorcyclists who enjoy riding together and raising money for charity.
“The club’s just family and friends,” Castillo said. “All they want to do is ride together and have fun.”
Attempts to reach the Old School Riders were unsuccessful Sunday.
The group’s Web site, www.oldschoolriders.com, described its members as “ordinary people who enjoy the freedom of riding.”
“No one represents any club,” a statement on the site read. “We are just friends and family who gather together and ride.”
A flyer on the Web site advertised Saturday’s event as “Bike Night,” and indicated there would be awards for best motorcycles, a raffle and security.
Sheehy said detectives needed witnesses to step forward and identify suspects.
“We’d like to ask for the public’s assistance in helping solve this one,” he said.

PHOTO: A memorial of candles and flowers stood in the parking lot of Falcone’s Pizza, 9247 Slauson Ave., in Pico Rivera Sunday, June 28, 2009. Three people were killed and seven others wounded at the pizza parlor the previous evening.