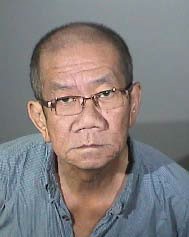 MONTEREY PARK — Police jailed one man and sought another Wednesday on suspicion of stealing and trying to steal large amounts of the herb ginseng from Garvey Avenue shops, police said.
Man Van Troung, 56, of Van Nuys was arrested on suspicion of being the geaway driver in the two crimes, reported Oct. 21 and Oct. 23, Monterey Park police officials said in a written statement. A second suspect remained at-large.
The first of the crimes took place at the FuKien Healthy Food Store in the 100 block of East Garvey Avenue, polioce said. Toung’s alleged partner entered the store and left without about $1,000 worth of stolen ginseng.
Two days later, the same man entered 101 Ve Inc., also in the 100 block of East Garvey Avenue, officials said. A witness chased him away as he tried to again steal ginseng.
“Troung is believed to be the driver of the alleged vehicle in both crimes,” according to the police statement. The Honda Accord used in the thefts was impounded from Troung at the time of his arrest.
The outstanding suspect is described as an Asian man between 35 and 40 years old, with dark hair in a crew cut style.
Detectives were reaching out to see if any other area businesses had experienced similar thefts lately. Anyone with information was asked to contact Monterey Mark Detective Gil Alvarez at 626-307-1226.