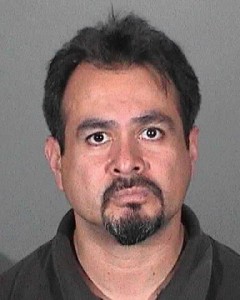 Covina police arrested a Walnut-area soccer coach from West Covina Wednesday on suspicion of sending inappropriate, sexual text messages to an 11-year-old player on his team, authorities said.
Albert David Gutierrez, 45, was booked on suspicion of contacting a minor with intent to commit certain offenses, according to Covina police and Los Angeles County booking records.
The arrest stemmed from an allegation by a woman that Gutierrez, who coached her 11-year-old daughter’s American Youth Soccer Organization team, sent inappropriate text messages to the girl in December, Covina police Sgt. Ray Marquez said.
“They were sexual in nature,” the sergeant said.
The girl then told her mother, who confronted Gutierrez about the messages, police said.
“The suspect apologized to the victim’s mother for sending the messages and indicated he would stop all interaction with her,” the police statement said.
The mother then reported the situation to Covina police, who launched an investigation.
Police took a report and interviewed Gutierrez, who quickly obtained a lawyer, in December, Marquez said.
Through his attorney, Gutierrez agreed to turn himself in to police after the holidays, Marquez said. Detectives continued building their case in the meantime.
But when the holidays passed and Gutierrez did not turn himself in, police went looking for him, the sergeant said.
Detectives conducted a surveillance operation Wednesday at Gutierrez’s home in the 3200 block of Stella Avenue in West Covina and arrested him without incident, officials said.
The messages involved text only, and no pictures were sent, Marquez said.
He added that investigators were unaware of any previous allegations of sex-related crimes against Gutierrez.
The father of the alleged victim, whose name is being withheld to protect the girl’s identity, said his daughter played in the Walnut-based branch of the AYSO, known as Region 624.
The father added that he and his wife were shocked to learn of the allegations against a man whom they had previously trusted.
He also said he was glad his daughter reported the inappropriate situation immediately, before it become more serious.
Jill Meshekow, Director of the Safe Haven program at the American Youth Soccer Organization National Office, said Gutierrez would not be on the soccer field as the investigation continues.
“Mr. Gutierrez is parent of children playing in Region 624,” she said in a written statement. “While not acting in any official coaching capacity over the last few years, Mr. Gutierrez has stepped aside from helping in this Region in any capacity pending the outcome of this case.”
Safe Haven Program is the AYSO’s program directed and protecting both children and organization volunteers. &ldquo;We are disheartened anytime there is an investigation of this nature and we will continue to support law enforcement as needed,&rdquo; Meshekow said.
Gutierrez was released from jail Thursday morning after posting $500,000 bail, records show. He could not be reached for comment.
He was scheduled to be arraigned Feb. 13 in West Covina Superior Court.
“Because of Mr. Gutierrez’s involvement in coaching youth sports in the local area, there is a concern there may be additional victims who have not yet been identified,” according to the police statement.
Anyone with information was asked to contact Covina police Detective Felipe Munoz at 626-385-5615, or 626-384-5808.

PHOTO of Albert Gutierrez courtesy of the Covina Police Department