Detectives launched a homicide investigation Thursday after a report of a kidnapping led deputies to discover a woman’s body in the garage of a Hacienda Heights home, apparently bound and inside the trunk of a car.
Relatives of a resident of the home at Las Tunas Drive and Avocado Terrace became worried after not hearing from her and decided to check on her about 9:30 a.m., Lt. Mike Rosson of the Los Angeles County Sheriff’s Homicide Bureau said. 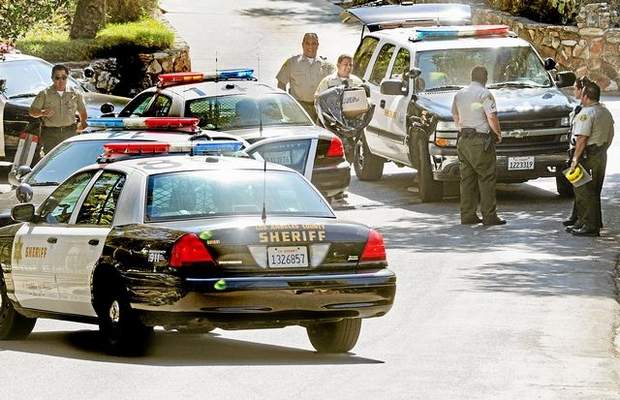 The family members saw something that roused their suspicion to the point that believe the resident of the home was being kidnapped, he said.
“Industry Station deputies received a call of a possible kidnapping in progress. That led deputies here,” Rosson said. What the family members saw that caused them to call authorities was not clear.
“At that time, they detained a male, and they also discovered a deceased female inside the location’s garage,” the lieutenant said.
He declined to comment on initial reports from the scene that the woman had been found bound and in the trunk of a car.
The woman had not been identified Thursday afternoon, and investigators had not yet had a chance to speak with family members. The woman was described by officials and neighbors as an Asian woman of about 60 years old.
The man who deputies encountered at the home, described as an Asian man in his late-30s or 40s and possible related to the dead woman, cooperated with investigators, Rosson said.
The detained man was “being questioned as a person of interest at this time, Rosson said. He had not been named a suspect in the slaying.
“The investigation is in its very, very early stages.” The lieutenant added.
Rosson said detectives did not believe the man lived at the home where the body was found, but possible visited on a regular basis.
Detectives were still waiting on a search warrant to enter home Thursday afternoon, he added.
Deputies had responded to calls in the past at the home including “domestic issues” and “maybe mental health issues,” Rosson said. He did not have further details.
Neighbors said a real estate agent lived at the home. Her husband was also believed to live there, and the couple’s adult son was often seen.
Pending an officials identification of the woman, neighbors hoped that the victim was not their longtime friend, who they said had lived in the neighborhood for more than 15 years.
Neighbor Rene Garciacano recalled seeing something that struck him as suspicious about 7:30 a.m. Thursday when he passed the house while bringing his children to school.
“The garage door was up,” he said, adding that the door has always been down in the past.
Garciacano said there were helicopters overhead when he returned home about 10 a.m.
When he turned on television news to see what was happening, “I recognized the house immediately,” Garciacano said.
The neighbor added he hoped the woman found dead was no his neighbor.
“She’s a very nice lady. She keeps to herself,” he said. Though neighborhood residents tend to be private, “She is a well-respected lady in this neighborhood.”
Andy Wang said he teaches Tai Chi to the woman who lives at the home every Saturday, and he, too, hoped she was okay.
He said he had seen the woman’s son visiting her on several occasions, and was not aware of any trouble in her household.
To see a massive sheriff’s investigation at his friend’s home, then learn a woman had been found dead there, “I’m shocked.”
“She is a nice lady,” he said.