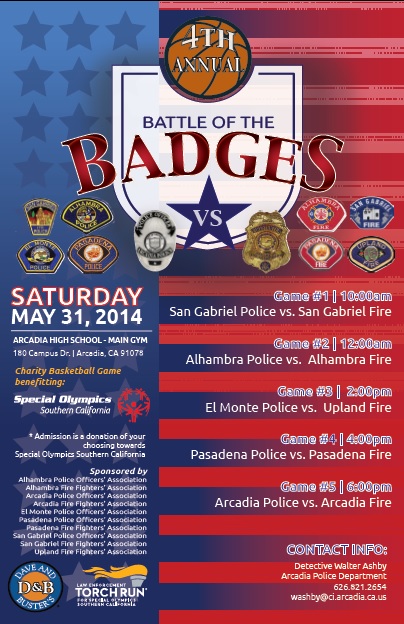 San Gabriel Valley police officers will take on their fire department counterparts on the basketball court in Arcadia this weekend as the annual Battle of the Badges tournament returns bigger than ever to raise money for the Special Olympics.
The series of games will begin at 10 a.m. Saturday in the gymnasium of Arcadia High School, 180 Campus Drive in Arcadia, organizers said in a written statement. The cost of admission will be a “donation of your choosing,” and proceeds will benefit the Special Olympics Southern California.
In addition to the action on the court, there will be jumpers for children, refreshments, a SWAT demonstration, historical vehicles, a fire truck and gaming booths set up by Dave & Buster’s, Arcadia police Detective Walter Ashby said. An iPad Air will also be raffled off.
“One-hundred percent of the proceeds are donated directly to the Special Olympics,” he said.
San Gabriel police officers will take on San Gabriel firefighters at 10 a.m.; Alhambra police will play Alhambra firefighters at noon; El Monte police will take on Upland firefighters at 2 p.m.; Pasadena police will play Pasadena firefighters at 4 p.m.; and Arcadia police officers and firefighters will face off on the court at 6 p.m.
For more information, contact Detective Ashby at 626-821-2654, or email washby@ci.arcadia.ca.us.