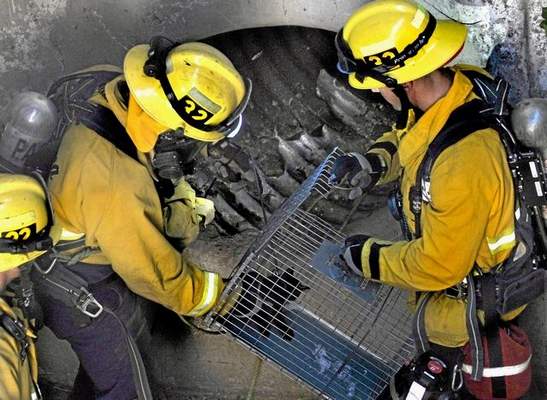 PASADENA >> Firefighters who rescued a black kitten from a storm drain pipe Friday afternoon named him “Lucky.”
The incident kicked off about 3:45 p.m. when a caller reported hearing the feline in a pipe connecting a storm drain and a drainage ditch along the 2900 block of Colorado Boulevard, Pasadena Fire Department spokeswoman Lisa Derderian said.
Officials were lowering a firefighter down to the pipe, which was about 3 feet wide, to look for the imperiled animal.
After spotting the black kitten, firefighters performed a “confined space rescue,” Derderian said.
“We sent a firefighter inside about a 36-inch pipe with a breathing apparatus,” she said.
The firefighter pulled the kitten, estimated to be about 4 months old, from the pipe.
“It was purring very strongly, so it appeared to be healthy,” Derderian said. Firefighters christened the kitten Lucky.
No one came forward to claim the cat, which was turned over to the Pasadena Humane Society.
PHS officials could not be reached late Friday for comment regarding Lucky.
But the rescue came only hours after the PHS reminded residents via its website that June is “Adopt a Shelter Cat Month.”
“During June only, the adoption fee for all adult cats (one year old and older) is cut in half — $35! In addition, all cats adopted in June will receive a free nail trim!” according to the PHS statement.
In addition, PHS runs other programs year-round to help adopt out cats to good homes.
All cats with black markings are available for an adoption fee of $13 on the 13th of every month, PHS officials said. Two adult cats may be adopted for a fee of $50. Any cat that has been at the shelter for more than a month is available for $35. Adoption fees are waived for senior adopting cats more than 5 years old, though a $20 mandatory microchipping fee still applies.
Adoption fees includes the spay or neuter surgery, officials added.