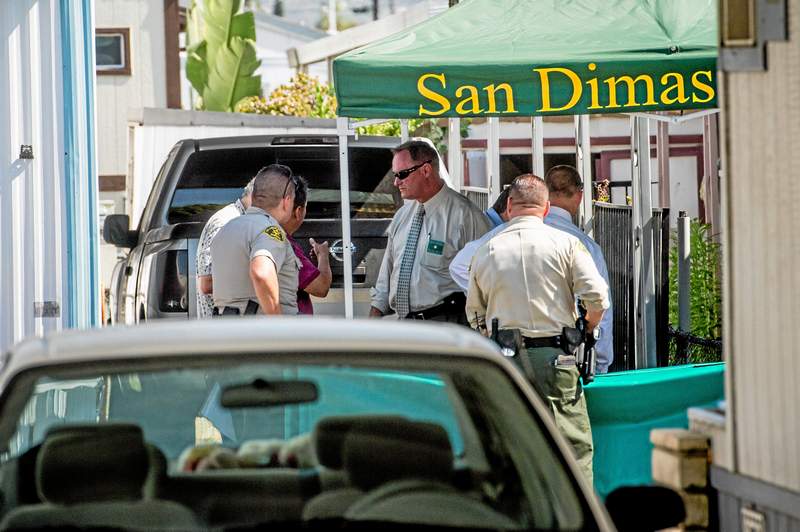 COVINA >> Authorities have identified a Glendora man found fatally shot outside a mobile home in an unincorporated county area near Covina Friday.
Richard Alan Wurtz, 37, died at the scene of the shooting, which was reported shortly after 11 a.m. at the Royal Palms Mobile Homes Park, 21210 E. Arrow Highway, Los Angeles County Department of Coroner Lt. David Smith said.
Two men were detained for questioning at the scene as deputies responded to reports of gunfire, however neither had been arrested Saturday morning, officials at the Los Angeles County Sheriff’s Headquarters Bureau said Saturday in a written statement.
“Deputies detained two adults from the location in order to investigate their connection, if any, to the shooting,” according to the sheriff’s department statement. “No arrests have been made at this time and the motive for the shooting remains under investigation.”
The names of the two men detained by deputies were not released.
Deputies investigating reports of gunshots encountered a man lying wounded outside a mobile home, and a second man leaving, sheriff’s Sgt. Nicole Davis said.
The wounded man was pronounced dead at the scene, and the other man was detained for questioning, officials said. A second man found nearby was also detained by investigators in the wake of the fatal shooting.
Neighbors said one of the men taken into custody by deputies at the shooting scene was a 32-year-old resident of the mobile home. They did not know the identity of the second person detained by deputies.
A family member of Wurtz reached by telephone Saturday did not wish to comment.
The ongoing investigating was being handled by detectives from the Sheriff’s Homicide Bureau.